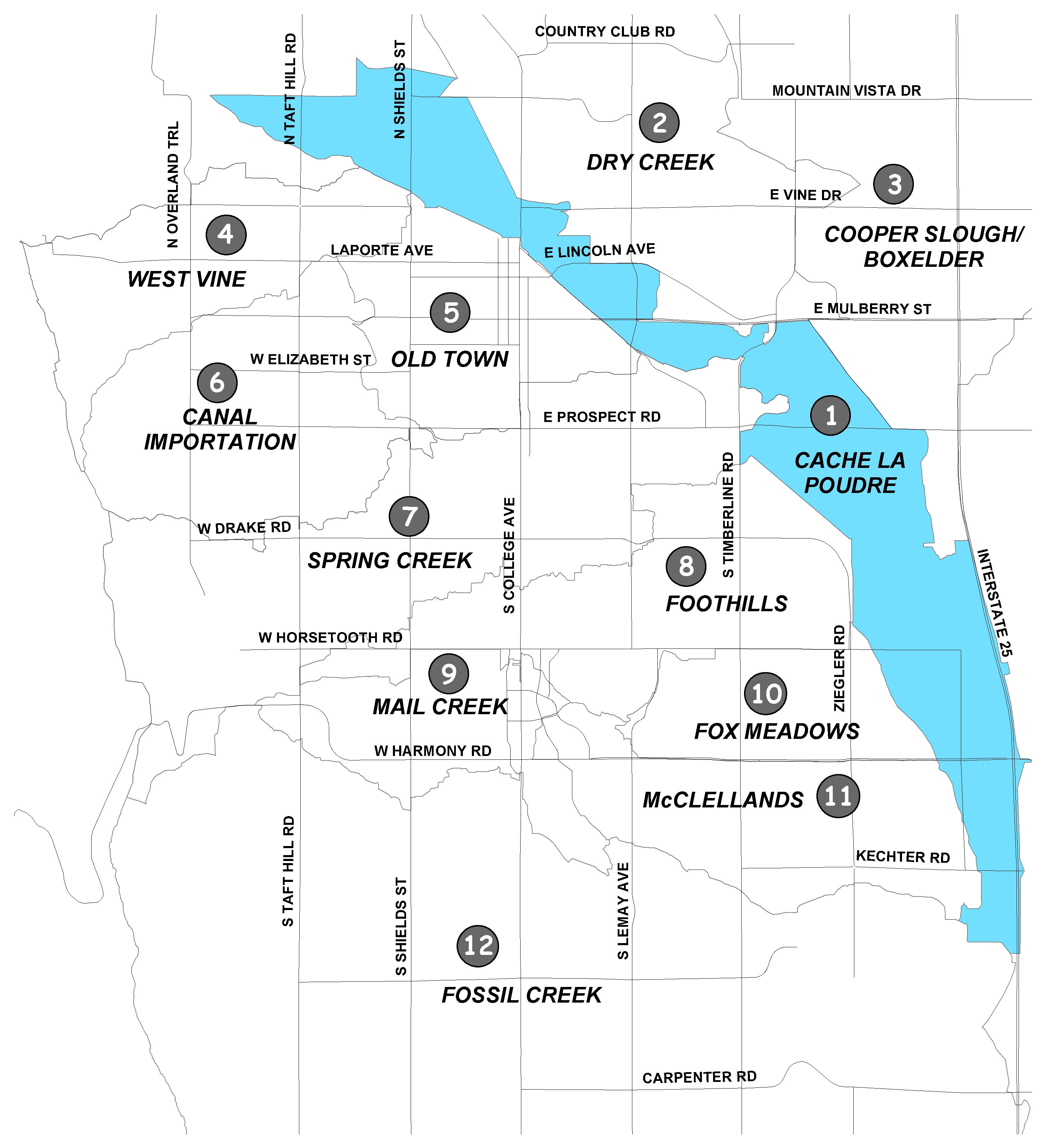 The Poudre River is a major tributary to the South Platte River. It is located in Larimer and Weld Counties, with a small portion of the drainage basin extending into southern Wyoming. Passing through Fort Collins, the Poudre River corridor provides for stormwater drainage from various contributing city drainage basins. Floodplain restrictions have limited the amount of building in the floodplain, resulting in lower development density. This lower density, combined with sensitivities to the natural environment, has resulted in a high concentration of parks and open space along the river corridor. Portions of the river corridor also contain old industrial sites, reflecting a time when the river was seen as a convenient means of carrying off waste products.

Approximately 3,160 acres of floodplain between Taft Hill Road and I-25 would be inundated by a 100-year flood, damaging approximately 188 structures. Estimates indicate that damages to property, utilities and infrastructure caused by the 100-year flood would total $9.5 million, with expected additional damages due to significant erosion.

Multiple alternatives were evaluated for reducing or eliminating flood damage and for controlling erosion, including: structural improvements such as levees or channel improvements, floodproofing, purchasing flood insurance, or acquiring property. The final solution for a particular site would be determined when the site is targeted for improvement.

The location of the City of Fort Collins is where it is today because of flooding on the Poudre River. The first military post, Camp Collins, was originally established near the present day town of Laporte. It was destroyed in 1864 when the Poudre River flooded. Camp Collins was relocated to higher ground near present day Old Town in Fort Collins.

There were several well-documented large floods on the Poudre River around the turn of the century. A flood in 1891 occurred due to a dam break on Chambers Lake.

The most notable flood was in 1904. This storm was greater than a 100-year event and resulted in the death of Fort Collins resident Robert Strauss. The Buckingham, Alta Vista and Andersonville neighborhoods were severely damaged by the 1904 flood.

The September 2013 flood resulted in flows on the Poudre River of approximately 10,600 cfs at the Canyon Mouth. This was a 10-25-year flood through Fort Collins. This flood event impacted most of the northern Front Range. Fort Collins did not have much damage because of open space preservation and land-use planning that minimized damage to structures. Learn more about these successful mitigation measures.

There are many ways to pay your bill, including online, in-person and by phone.

When it rains and as snow melts, runoff carries pollutants such as oil, antifreeze and gas down storm drains, contaminating our rivers, streams and lakes. Don't drip and drive.

After a rain, skipping watering until the grass dries will save not only water, but also money.