How much will adding solar panels reduce my bill on Time-of-Day pricing?highlight_off

Every household is different. Key variables include:

TOD pricing provides solar credits for energy that isn’t immediately used in your home, which flows back into the grid. The on-peak rate for generation credits is at least three times the off-peak credit rate. Energy charges reflect a similar difference between on-peak and off-peak rates. For details: TOD – Pricing and TOD Pricing – Solar Customers.

The graph below shows the monthly bills for an average Fort Collins residential customer (without solar) who uses gas to heat their home – approximately 7,700 kWh per year. In this example, the customer proposes to add a 6-kW solar system facing south, which will generate approximately 8,900 kWh (115 percent of the load).

In this example, by adding a solar array, the average monthly bill is reduced by more than $50. The total annual energy bill paid to Fort Collins Utilities is reduced from about $800 to approximately $165. The customer still purchases energy from the grid whenever their solar array is not generating enough energy for their loads, typically at night. 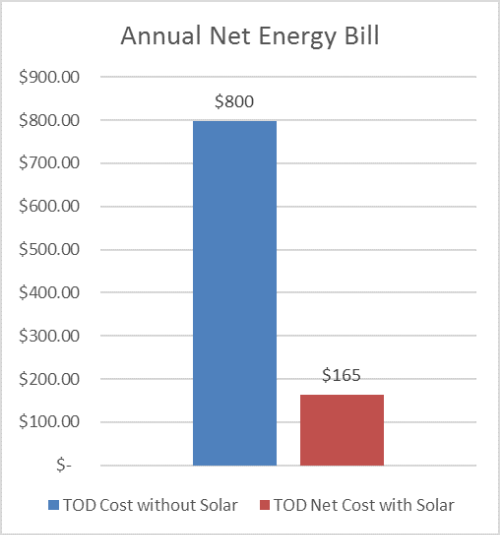 While all residential customers can benefit from TOD pricing by reducing or shifting a portion of their energy use from the on-peak hours, only customers with renewable generation can benefit from pushing power back to the grid during on-peak hours. Excess solar generation is credited at the full retail rate at the time it is returned to the grid.

What is the bill impact for solar customers from the change to Time-of-Day pricing?highlight_off

The impact depends on how much and when energy is used, as well as the size of the solar system and direction it faces.

How much money is saved by conserving energy and shifting use away from on-peak Time-of-Day hours?highlight_off

Reduce your use and costs:

In the example below, the average Fort Collins household bill is shown with power supplied by a 6-kW solar array. The graph illustrates that conserving 10 percent of on-peak energy use plus shifting another 10 percent of energy use from on-peak to off-peak times saves a customer with an average size solar system $60/year, or an average of $5/month. 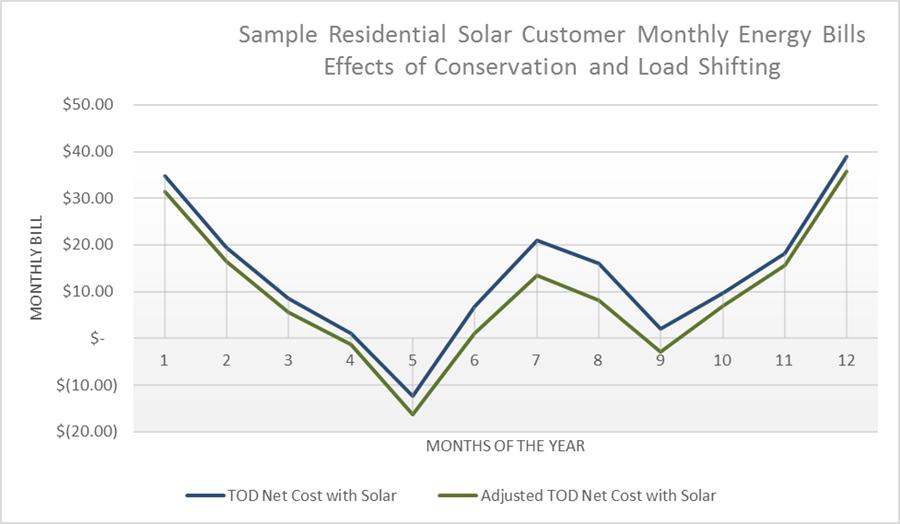 Does the orientation of my solar array affect my annual value generated under Time-of-Day pricing?highlight_off

Did you know that the amount of energy generated by a solar array over the course of a year varies depending on the direction it is pointed? If weather was not a factor, a solar array would generate the most energy facing south. However, Fort Collins weather tends to have a higher likelihood of heavy clouds in the afternoon. Because of the influence of higher value for generation under the Time-of-Day (TOD) pricing on-peak periods, people have asked whether solar systems should be oriented more to the west to capture more generation during those on-peak hours.

Fort Collins Utilities’ analysis of solar production value under TOD pricing shows that south (180 degrees) is still the best orientation to maximize the financial value of energy generated by a solar system. 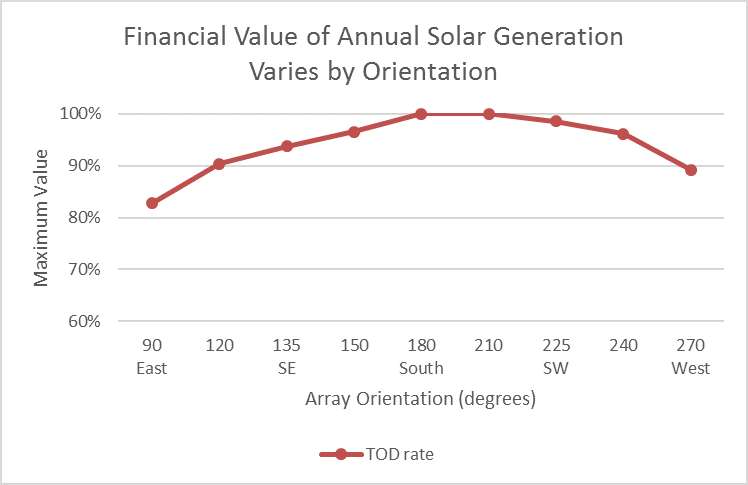 How would battery storage help reduce bills under Time-of-Day pricing?highlight_off

Customers who install a battery storage system can store excess solar energy generated during off-peak hours and discharge the battery during on-peak hours. The battery can be discharged to serve energy loads in the home and can also be discharged to the grid to generate net metering credits.

This can be beneficial because excess solar production sold back into the grid during the off-peak hours of the day is valued at off-peak rates, roughly 6 cents/kWh. If that energy is stored until the on-peak period and discharged, it is worth more than 3 times as much - roughly 20 cents/kWh.

Where can I learn more about solar photovoltaic (PV) technologies?highlight_off
What is the maximum size PV system I can install?highlight_off

Maximum capacity also is limited to the lesser of:

What happens if the rebates run out?highlight_off

Current funding is $490,000. Subject to availability of funds, applicants on the wait list will be included in next year's program.

Are do-it-yourself projects allowed and eligible for rebates?highlight_off

Do-it-yourself projects are allowed, but are not eligible for rebates.

How do I calculate the size limit when adding to an existing solar system?highlight_off

If you already have a solar PV system and are considering a possible expansion, solar-rebates@fcgov.com?subject=Question%20about%20expanding%20my%20solar%20system before working with solar contractors on designs so that we can evaluate how much solar you could add within the maximum size limits.

We will need a copy of your solar generation report for the past 12 months (typically available through your inverter or solar contractor) in order to assess the maximum allowable expansion of your solar system. That data allows us to understand your total PV system production and to calculate your total energy consumption on-site. You’ll be allowed to expand your PV array so that the total combined production of the old array and new array does not exceed 120 percent of your total annual electricity consumption.

You and solar contractors can use this data, along with your solar production data, to model your total energy use and develop an accurate projection of what your energy costs. We recommend that you have contractors model your projected savings using the Time-of-Day pricing now active in Fort Collins.

These are the formulas we use to establish your allowed solar expansion limit based on annual data:

Note: the time periods for solar production and metered energy consumption and returned must be aligned properly to calculate these values correctly.

Do I have to be tied to the electric grid to be eligible for a rebate?highlight_off

Yes. Your system must be grid-tied, and you must be a Fort Collins Utilities electric customer.

Do I have to get an energy audit?highlight_off

Yes, if your home was built prior to Jan. 1, 2005. You'll have to provide proof of an on-site and documented energy audit through Efficiency Works' Home Efficiency Upgrades, or another approved RESNET/BPI auditor. This audit is not required to apply but will need to be scheduled after your rebate is reserved. The audit must be completed before the rebate is issued.

Can I save money on my energy bill with a PV system?highlight_off

Even with rebates and tax incentives, PV systems can take years to pay for themselves. Consult your solar contractor for a payback estimate.

Can I still apply if my proposed site doesn't quite meet the program requirements for orientation and shading?highlight_off

Applications may be accepted for systems that don't completely conform to performance guidelines at a prorated rebate level in order to account for the reduced performance. Fort Collins Utilities reserves the right to exclude systems that are likely to perform substantially below the program guidelines.

What happens to the renewable energy credits (RECs) for my PV system?highlight_off

Fort Collins Utilities' rebate includes the purchase of the RECs associated with your system helping with compliance with the State of Colorado Renewable Energy Standard and the community's Energy Policy and CAP goals. Commercial rebates for systems greater than 20 kW may have their RECs retired on their behalf by the City of Fort Collins.

Will the rebate program be extended?highlight_off

The program is intended to provide year-round access to rebate funding for all eligible applicants. We may adjust the rebate amount per customer as needed to provide funding stability.

What does "assignment of rebate to installer" on the application mean? highlight_off

Under some circumstances there are business or tax advantages to assign your rebate to your installer. Consult your solar contractor and/or tax accountant.

Can I apply for a rebate if I already have a PV system?highlight_off

What is the cost of an average PV system in Fort Collins?highlight_off

At a national level, the average residential PV system installed cost was at $2.89/watt-DC at the end of Q2 2018, according to Wood Mackenzie, Ltd. / SEIA U.S. Solar Market Insight. 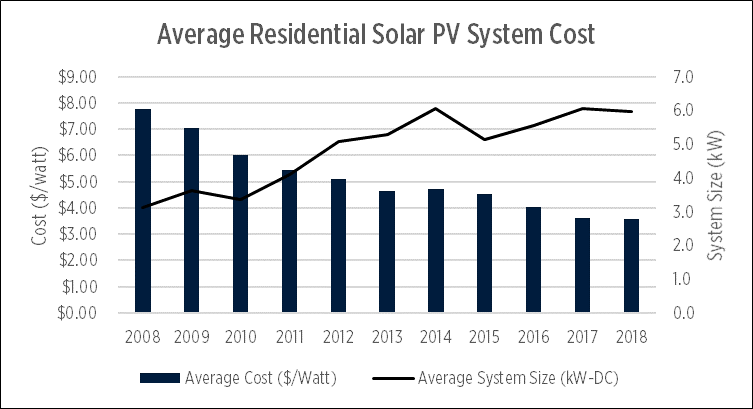 When considering competitive bids from solar contractors, keep in mind that a variety of factors can drive higher costs, including multiple sub-arrays that may be installed on multiple roof surfaces, premium solar panels, or other premium equipment in the system.

We encourage citizens to check the Better Business Bureau and solicit competitive bids from at least 3 contractors.

Oversizing solar PV systems can present a financial risk to the customer. Fort Collins Utilities does not pay customers for accumulated credits from solar generation unless all the following criteria are met:

Can I receive a rebate for an addition to my existing solar PV system?highlight_off

The Fort Collins Utilities solar rebate is only available for new installed systems. Customers who already have received a rebate on their solar installation are not eligible to receive a second rebate for additional solar at the same address.

Please contact Utilities for any questions not answered here.