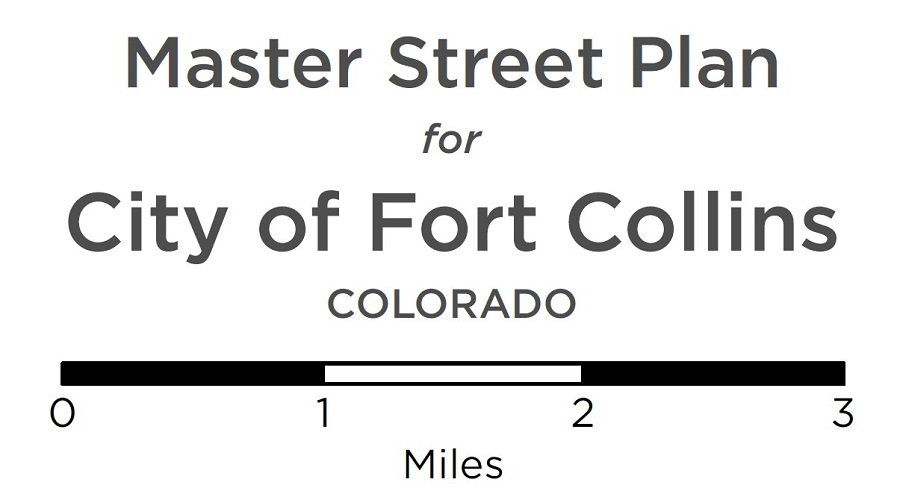 You can also view the map online at FC Maps

What Is The Master Street Plan?#

The Master Street Plan (MSP) is a map of the City's long-range vision for its major street network. This includes existing and future vehicle, bicycle, and pedestrian connections throughout the city and its growth management area

The MSP also reflects the type of street (i.e. collector, arterial, etc.) and the general location for planning transportation connections. Final street alignments are determined and designed at the time of development.

Not all city streets are reflected on the MSP. The map depicts only shows arterial and key collector streets. Other collectors and local streets are not represented on the MSP but can be found on approved development plans and subdivision plats.

How Is The Master Street Plan used?#

There are a variety of ways that City staff and others use the MSP.

Development Review: The City of Fort Collins Land Use Code requires that all development plans "provide for or accommodate the streets and transportation facilities identified on the MSP." This requirement allows the City to ensure that the necessary land and funding to construct the street are provided at the time of development. The City's Complete Streets policy ensures that bicycle lanes and sidewalks are part of newly constructed streets.

Development Impact Fees: The City Engineering department uses the MSP to determine development impact fees for streets (Street Oversizing Fees). These developer fees help pay the portion of street costs related to the traffic created by the development. The fees are revised on a regular basis depending on changes to the MSP.

Planning Transportation Connections: The MSP is an excellent tool to understand the City's long-term vision for our street network. Developers, residents, neighboring communities, and others can learn how the existing and future network will impact a development, safe routes to travel to school, or a connection to another municipality's transportation system. 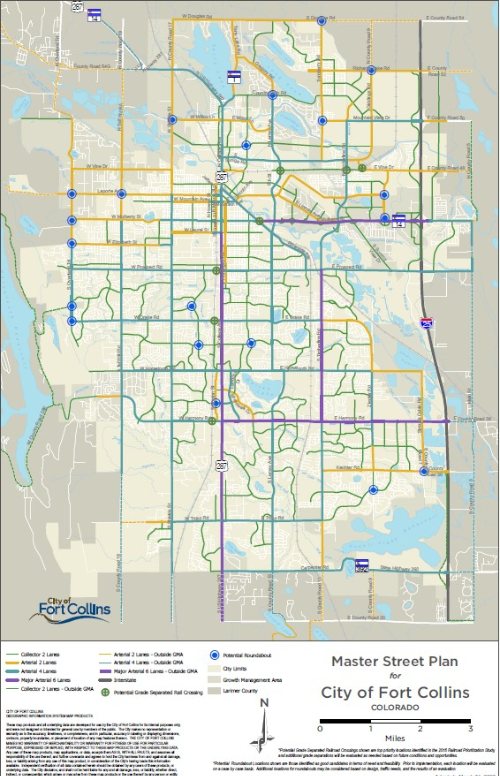 The 2020 changes to the Master Street Plan were primarily street classifications, updated for the following reasons:

Additionally, the future traffic interchange at Vine Drive and I-25 (shown on the map in the past) was removed.  The Colorado Department of Transportation (CDOT) rebuilt the Vine Drive bridge over I-25 in 2019, with the clear intent of that location not being an interchange in the future.

As needs arise, or developments are proposed, the final determination for intersection configuration will be made based on a more detailed review. The locations shown on the map are not intended to be definitive as there are also other locations that may be good candidates for a roundabout based on aesthetics, placemaking, pedestrian comfort, development request, etc., those will be considered on a case-by-case basis.

In 2016 the City conducted a Railroad Crossing Prioritization Study to evaluate existing at-grade railroad crossings that are candidates for reconstruction as grade-separated crossings. The Study considers a wide variety of data to develop recommendations, including traffic congestion and safety, constructability, emergency response, adjacent land use impacts, and multimodal factors.  That Study identified seven top priority locations (out of 22 arterial roadway railroad crossings). The 2020 update aligned the MSP map with the results of the Study.

How Is The Master Street Plan Updated?#

The MSP is a living plan and is regularly revisited and amended to reflect new infrastructure. An MSP amendment review incorporates a wide variety of information including technical analysis and input from various City departments, travel demand modeling, and City Plan and Transportation Master Plan policies. The data and City policies are compiled prior to formulating a staff recommendation to the City's Transportation Board, Planning & Zoning Board, and City Council.

For more information about the Master Street Plan, please contact us.