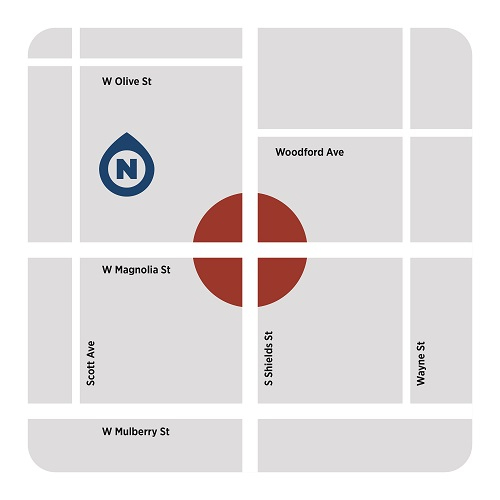 The 2014 Bicycle Master Plan identifies the intersection of W. Magnolia St. and S. Shields St. for multimodal improvements as part of the Magnolia Bikeway which connects Magnolia St. directly to City Park and downtown on low-volume local streets. The current unsignalized intersection of Magnolia and Shields is a barrier to active transportation.

City staff, in collaboration with a private consultant, developed an initial design for this intersection, which was modified based on neighborhood feedback. The resulting design was introduced to area residents in 2017. The project had been delayed as originally proposed in order to coordinate with Utilities on several important projects in the immediate project area. At this time, Utilities, Traffic Operations, Engineering, and FC Moves are prepared to move forward with the proposed utility upgrades and multimodal improvements refined in 2017 with neighborhood feedback.

Outreach activities are described below, including key dates and deliverables.

The City is planning to install a signal dedicated to pedestrians and bicyclists crossing S. Shields at W. Magnolia with a surface improvement design similar to that at Laporte Ave. and Loomis St. Based on neighborhood feedback in 2017, the City selected the design below for the W. Magnolia and S. Shields multimodal improvements project. This project helps complete the Magnolia Bikeway, a Safe Routes to School Corridor, and the continuation of the W. Mulberry east-west bike route. The selected design is now anticipated for construction in summer 2021.

The project design is available below for your review below.  Additional outreach will occur with the neighborhood to provide information on construction. 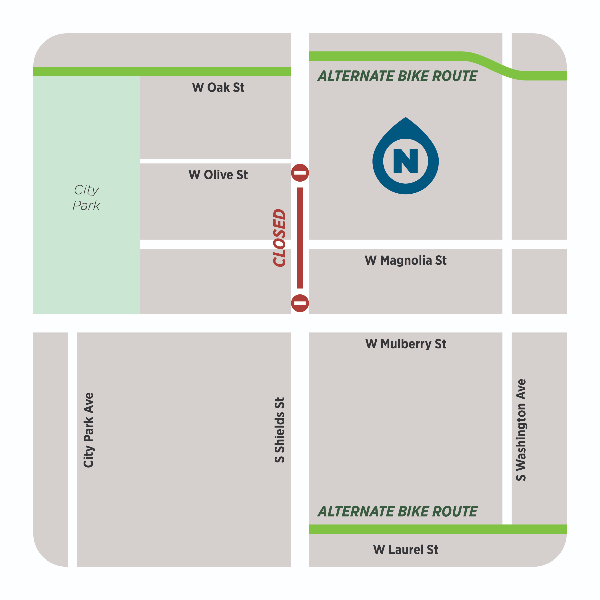 If the Magnolia Bikeway or S. Shields St. are part of your typical commute or travel pattern by bicycle, consider using the following detour routes while the utilities and multimodal improvement work is underway through August 2021.

S. Shields St. between W. Olive St. and W. Mulberry St., including the intersection of W. Magnolia and S. Shields, will be closed through August 2021.

East-West: To cross S. Shields St., we recommend crossing at W. Oak St. or W. Laurel St. Traffic volumes on Shields will be reduced due to the closure. 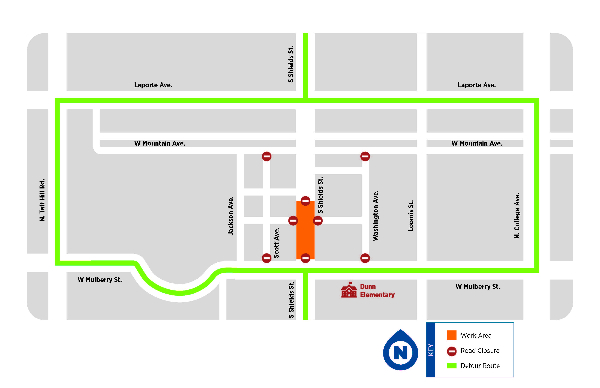 If S. Shields St. is part of your typical commute or travel pattern by car, consider using the following detour routes while the utilities and multimodal improvement work is underway through August 2021.

S. Shields St. between W. Olive St. and W. Mulberry St., including the intersection of W. Magnolia and S. Shields, will be closed through August 2021. 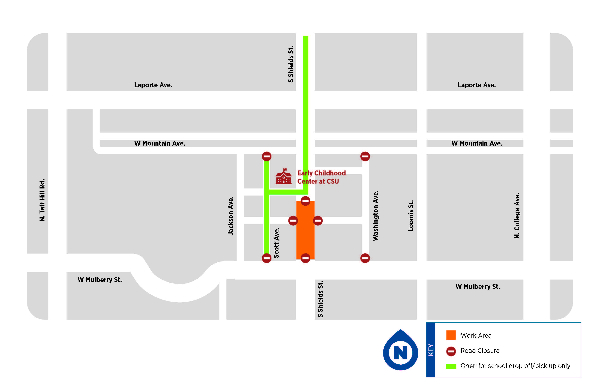 Scott Ave. and W. Olive St. will remain open for local traffic only. Families and staff are allowed to use these routes to access the Early Childhood Center at CSU.

The following work will be done by the Utilities Department as part of this project:

Construction is underway, beginning with storm water and waste water improvements. Multimodal surface improvements are anticipated to begin in mid-July 2021, with project completion in the first week of September 2021.