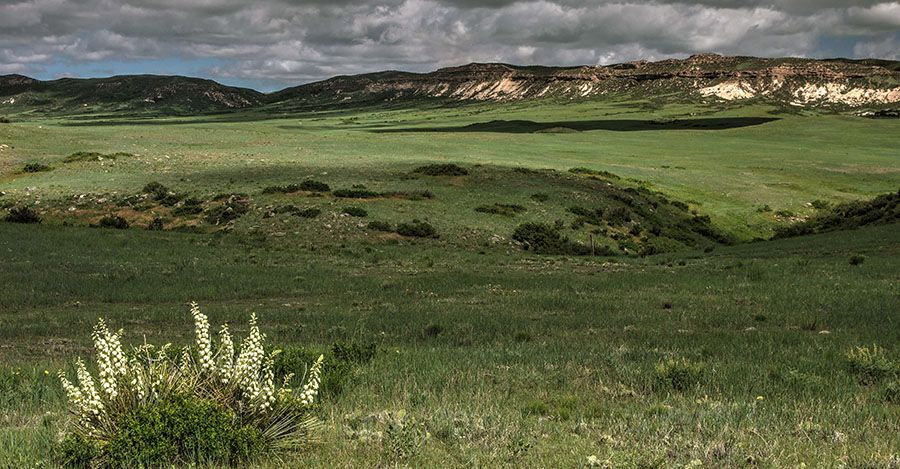 The Wonders of the Shortgrass Prairie Ecosystem#

The shortgrass prairie spans eastward from the Rocky Mountains and stretches from Canada to Mexico. The shortgrass prairie covers much of eastern Colorado and encompasses rolling hills, canyons, bluffs, and expansive views of the horizon. It may take a more patient eye to find its beauty, but the prairie is nothing short of magical.

Fifty percent of the shortgrass prairie ecosystem is lost due to its conversion to human development. Thanks to Fort Collins voters, the City of Fort Collins Natural Areas is able to protect a piece of the shortgrass prairie ecosystem by managing Soapstone Prairie Natural Area. This functioning and intact grassland provides habitat to unique wildlife and rare plant species. 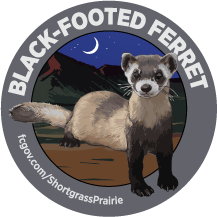 The Natural Areas Department has created stickers to highlight important species in shortgrass prairie ecosystems and you can collect them all! Scroll to explore some of the unique wildlife that calls Soapstone Prairie home and to see your conservation dollars at work. 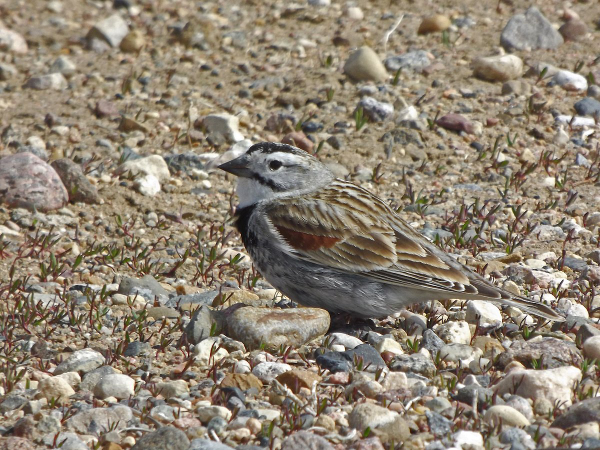 Habitat: Thick-billed longspurs are highly associated with the shortgrass prairie ecosystem.  They occupy areas of short, carpet-like conditions, formed primarily by a mix of buffalo grass and blue gramma, some bare ground, intermittent mid grasses, and shrubs. They prefer disturbed areas, driven by sustainable grazing and fire intervals resembling historic ranges.  Both grazing and fire help to maintain their preferred conditions. The species has a limited range in Colorado, represented by the southern end of their breeding range.

Phenology/Timing: Thick-billed longspurs arrive in Colorado as early as March, but more typically in April. Males establish territories upon arrival and perform aerial displays in the sky to attract females. They will remain in Colorado until early-mid October. During the winter months, Thick-billed longspurs depart to their wintering grounds in western Texas and north-central Mexico where there is similar habitat to what they use at Soapstone Prairie.

Breeding: Females likely select a nest site and incubate a clutch of 2-5 eggs. The incubation period is 12 days, and the young leave their nest around 10 days of age.

Conservation needs: Like many species endemic to prairie ecosystems, Thick-billed longspurs have experienced significant population declines.  This is due to the loss of habitat, grassland conversion to agriculture, urban expansion, and other land-use changes.  Areas like Soapstone, which are managed for ecological function, are critical for this species, and its continued presence in Colorado.

Where can visitors see this species? Thick-billed longspur may be viewed on any of the trails at Soapstone Prairie, primarily the Pronghorn Loop and Plover Trail (closed from 4/1-7/15). Look for the males singing while executing their aerial displays!

Your conservation dollars at work: NAD is conducting breeding bird surveys with Bird Conservancy of the Rockies to keep a pulse on the condition of the populations at Soapstone Prairie. NAD also monitors the condition of their preferred habitat and uses both data sets to make management decisions that support Thick-billed Longspurs. 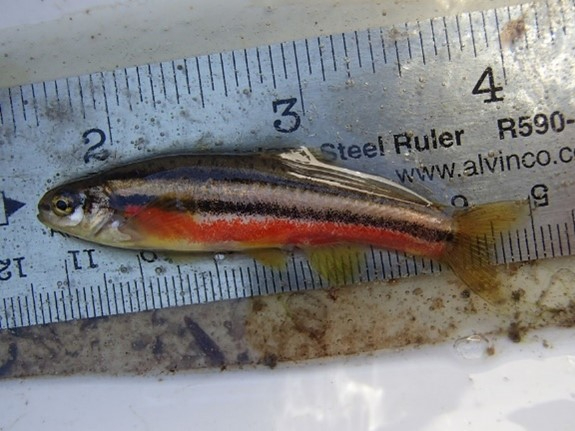 The northern redbelly dace is a small minnow endemic to Colorado. During summer, males acquire the red color on their bellies that inspire their name. The species has a highly restricted range in Colorado. Although they are not on the federal endangered species list, the state of Colorado considers them endangered. A population can be found at Soapstone Prairie.

Conservation needs: Due to the endangered populations of redbelly dace in Colorado, there are a number of conservation needs such as: identifying suitable habitats for relocation, restocking appropriate streams and ponds, and reducing changes to their aquatic habitat.

Where can visitors see this species? The northern redbelly dace population occurs in an area of Soapstone Prairie that is closed to the public. This closure helps to protect dace and allows scientists to study the population without human impact. Visitors can see native plains fishes at the aquarium display at the Fort Collins Museum of Discovery.

Your conservation dollars at work: Colorado Parks and Wildlife established a new population of Redbelly Dace at Spottlewood creek. This provides the species with more stability in Colorado and helps mitigate impacts that threaten its persistence. 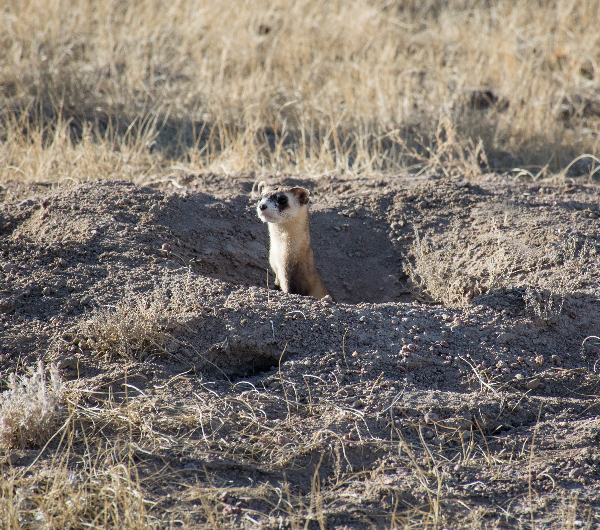 Habitat: The black-footed ferret (BFF) is the only ferret species native to the Americas. Its historical range spanned much of western North America’s intermountain and prairie grasslands, extending from Canada to Mexico. BFFs have been reintroduced in the wild at 29 sites across 8 states, Canada, and Mexico. Black-footed ferrets are highly specialized predators that depend upon prairie dogs and their burrows for survival. Prairie dogs make up more than 90% of the BFF’s diet. Prairie dog burrows provide BFFs with suitable dens to raise their young as well as escape predators and harsh weather. In the past, this dependence was a good survival strategy because prairie dogs were plentiful. However, in the modern era, as human activities and disease decimated prairie dog populations, this unique survival strategy proved detrimental to BFF survival.

Reproduction: Black-footed ferrets mate in spring, usually in March or April, and the gestation period (length of pregnancy) is 42 days. The average litter size is 3-4 kits, although they can have anywhere from 1-10 kits.

Conservation Need: Protection and conservation of prairie dog species on contiguous, unfragmented,  landscapes are essential to black-footed ferret recovery. Equally important, is mitigating the impacts of sylvatic plague on both prairie dogs and ferrets to ensure the survival of both species.

Where can visitors see this species? Black-footed ferrets, like Swift fox, are primarily nocturnal. Keep your eyes open for them when you travel through or near any prairie dog colony. They have been seen at Soapstone Priarie at dawn and dusk. Trails that travel in or near prairie dog towns are; Pronghorn Loop, southern Cheyenne Rim, and Plover Trail (closed 4/1-7/15).

Your conservation dollars at work: NAD works closely with Colorado Parks and Wildlife and US Fish and Wildlife to recover Black-footed ferrets at Soapstone Prairie. Black-footed ferrets were reintroduced at Soapstone Prairie and Meadow Springs Ranch in 2014. Since that time, 145 ferrets have been released between the two properties. Wild-born kits have been born at both properties, which is a big success for the project. NAD also helps to recover the species by spotlight monitoring and mitigating the impacts of disease for both prairie dogs and ferrets. 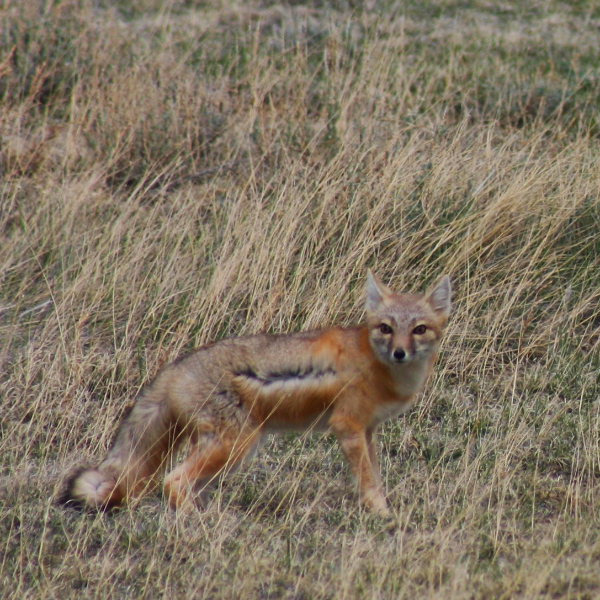 Swift foxes are the smallest wild canine living in North America, weighing just 3-7 pounds and are about half the size of a red fox. Swift foxes typically live 3-6 years but have been known to live up to 14 years. Swift foxes are named for their high speeds, where they can reach speeds up to 25 miles per hour. Swift foxes are typically nocturnal hunters, active from dusk to dawn. They can, however, be seen sunning themselves at the entrance to their burrow on sunny winter days and pups frequently play near the den during the day.

Habitat: Swift foxes are endemic to the short and mid-grass prairie of Eastern Colorado.  They are excellent diggers and excavate their own dens. They may also use and modify prairie dogs and badger burrows. They use their dens year-round.

Reproduction: Swift foxes mate in December through February. Pups are born in the den, in Spring. The average litter size is 4-5 pups. Pups come above ground at 4-5 weeks old.

Conservation Needs: The Swift fox is a species of higher conservation need in Colorado. Protection and conservation of short and mid-grass prairie are essential. Swift fox populations need protection from non-target poisoning, hunting, and trapping.

Where can visitors see this species? Swift fox are primarily nocturnal, but don’t be deterred! Keep your eyes open for them when you travel through or near any prairie dog colony. They have been seen at Soapstone Prairie at dawn, dusk, and in the middle of the day. Trails that travel in or near prairie dog towns are; Pronghorn Loop, southern Cheyenne Rim, and Plover Trail (closed from 4/1-7/15). 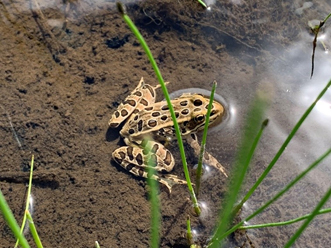 Northern leopard frogs were once abundant across many wet habitats. Populations began to decline and disappear in the 1990s, for a myriad of reasons, from ecological events, human alteration of habitat, disease, and bullfrog establishment. Leopard frogs can become active as early as March at lower elevations and continue activity into October and November until cold weather forces them into dormancy.

Where can visitors see this species? Currently, the population at Soapstone Prairie is small and in an area closed to the public. This potentially fragile population needs protection so that NAD can continue to bolster it and hopefully grow its presence.

Your conservation dollars at work: NAD is conducting surveys at Soapstone Prairie to assess and understand the condition of the population. Currently, the population is small and does not occupy all suitable habitats. NAD is testing for a disease that could be impacting the species. NAD is protecting and conserving a strong population at Meadow Springs Ranch. NAD wildlife biologists are working with Colorado Parks and Wildlife to investigate the potential of supplementing the Soapstone habitat/population, with the Meadow Springs population. 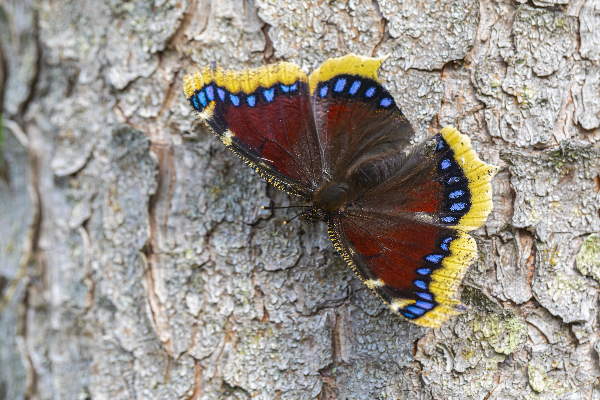 Mourning cloaks are one of the few local butterflies that hibernate as adults. They overwinter under bark and leaf matter. When their wings are closed, they look very much like bark or dried leaves.

Life Cycle: Mourning cloaks live longer than most butterflies (10 months or more). Emerging on sunny late-winter days in February and March, this striking butterfly is a welcome sight.  Mating occurs in spring and early summer when females lay eggs in April and May. Fresh adults emerge in mid-summer.

Habitat/Host Plants: At Soapstone Prairie, mourning cloaks can be found close to their host plants, willows, and cottonwoods, which are primarily found in riparian areas. Riparian features are less common at Soapstone Prairie.

Conservation Need: This species is common, but not abundant.  Because it wanders and hibernates, it can be found in a variety of habitats, where its host plants are found (willows, cottonwoods, hackberries, elms, birches, aspens). Because its host plants and their associated habitats are uncommon at Soapstone, it’s important to conserve those resources, so that the mourning cloak can complete its life cycle on the property and continue to survive there into the future.

Where can visitors see this species? Mourning cloaks may be seen almost anywhere at Soapstone Prairie. Typically not abundant, but wide-ranging, keep your eyes open for this unmistakable butterfly.

Your conservation dollars at work: Host plants are essential for butterflies to complete their life cycles. NAD is protecting areas of cottonwoods and willows, which are host plants for Mourning Cloaks, by managing cattle access to riparian areas, while providing water for cattle with stock tanks, away from important riparian areas. Cattle tend to congregate around trees and shrubs for shade and enjoy the water that’s usually close by. This near-constant presence creates undesirable impacts and compromised the regeneration of the plants so important to the Mourning Cloak.

The Natural Areas Department has produced stickers for each of these rare species. Collect them all at local events or volunteer with us! 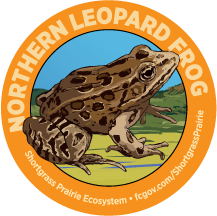 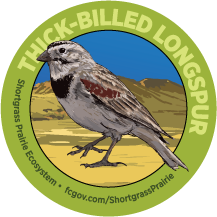 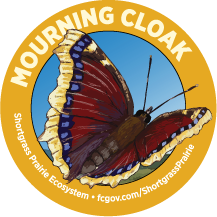 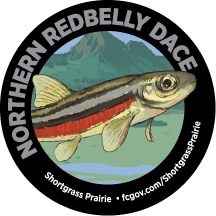 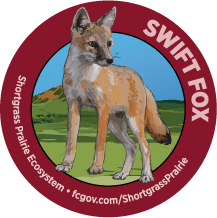 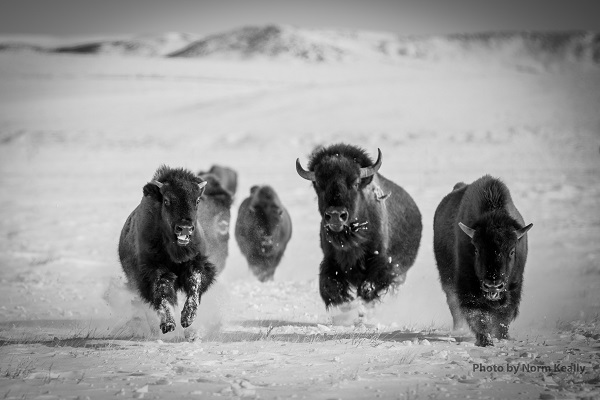 The Mountains to Plains Zone 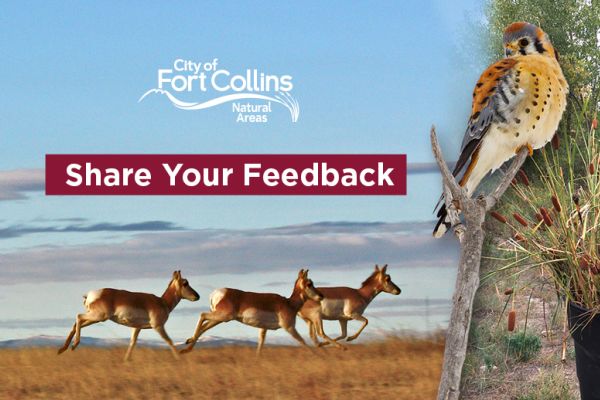 Help plan the future of your natural areas! Share your feedback on the management of various natural areas. Feedback for Soapstone Prairie, Poudre River, and Kestrel Fields Natural Areas is due by May 31.

The Mountains to Plains Zone

Help plan the future of your natural areas! Share your feedback on the management of various natural areas. Feedback for Soapstone Prairie, Poudre River, and Kestrel Fields Natural Areas is due by May 31.