The Federal Railroad Administration (FRA) is collecting data regarding blocked crossings. Click the link below to report a long blockage. Fort Collins is encouraging residents to submit reports anytime they are stopped by a train at a railroad crossing. Good and plentiful data from Fort Collins can help the FRA in studying the problem. 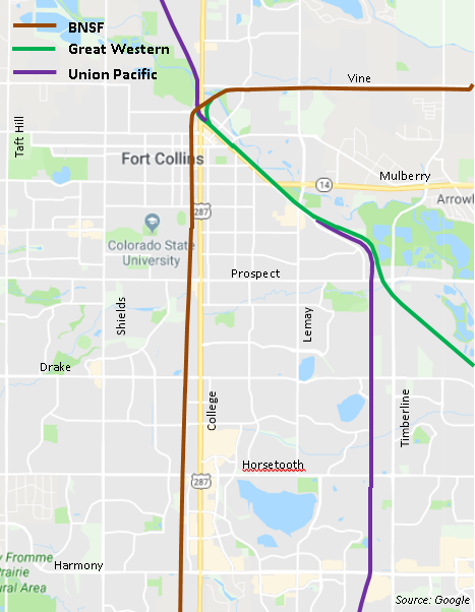 Historically, trains along the BNSF line have numbered about 8-10 per day and were usually up to one mile long (roughly 100 cars). Blockage times along the major east/west arterials west of College (Harmony, Horsetooth, Drake, Prospect, and Mulberry) were about 3 minutes, 30 seconds. Blockage times at Lemay / Vine could be longer due to the presence of the switching yard.

At times, these long trains stop in Fort Collins as they wait for tracks to clear further north, or due to activity in the switching yard along Vine. Blockage times for these events can exceed 30 minutes. In November 2019, a person was seriously injured while attempting to climb between railcars of a long train when the train started moving after an extended stop.

As shown in the table and graph, the number of double trains and long blockages has increased exponentially. 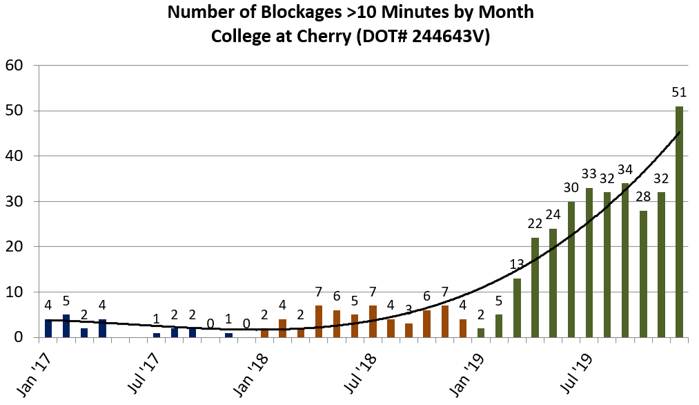 What is the City doing?#

The issues with these long trains are concerning to the community as well as City leadership and staff. Because Fort Collins has no jurisdiction over trains, avenues other than regulation must be used to support change.

City staff traveled to Washington, D.C. in January 2020 and met with the FRA's Director for Grade Crossing and Trespassing to express concern about the long trains. The FRA indicated that longer trains are a concern nationwide and they are collecting data to quantify impacts.

The FRA has developed a website (https://www.fra.dot.gov/blockedcrossings/) where people can report blocked crossings. Residents are encouraged to provide feedback to the FRA by using the website when they encounter long trains.

City elected leadership is coordinating with our elected delegation in Washington to explore legislative options.

The City opened the new Vine/Lemay Overpass to traffic in December 2021. Construction, landscaping, and art installation is expected to be complete later in 2022. Among the benefits, the new bridge will alleviate backups on old Lemay Avenue at the BNSF Railroad crossing near Vine Drive.

The City’s Engineering and Traffic departments will test ‘wayside horns’ in downtown Fort Collins in March 2022 at the intersection of Mason Street and Mountain Avenue.

The test is part of the City’s efforts to investigate the use of wayside horns along the Mason Street corridor to reduce noise and improve quality of life for residents and businesses.

Wayside horns are permanently installed devices at railroad crossings that sound when a train is approaching. They have a lower noise impact than train-mounted horns and can be directed in the direction of oncoming traffic rather than in front of the train itself.

The City has not made a decision on whether or not to install wayside horns. The test is an early step in a multi-year process that will require approval by the Federal Railroad Administration. City staff will take decibel readings from the wayside horns and compare those to readings of existing train horns at the same location.

The unique nature of the BNSF tracks through downtown Fort Collins along Mason results in a single train blowing their horn up to 48 times in the course of about three minutes along one mile of track. This requirement is often excessive and disruptive.

The City is pursuing the potential of creating a quiet zone that would allow flexibility in when / how often a train blows its horn.

Does the city control train schedules?

Why are trains allowed to come through town during rush hour?

Railroad companies have government priority, always receiving the right-of-way. The best that Traffic Operations can do is to alleviate the back-up once a train has finished crossing at an intersection. The Traffic Management Center gives Traffic Operations the ability to monitor a train’s movement through town and adjust for any back-up that may occur.

Are these long trains legal?

Yes they are. The Federal Railroad Administration (FRA) regulates railroads, and they do not have maximum allowable length of a train.

Can Fort Collins pass an ordinance limiting the length of time a crossing can be blocked?

Fort Collins could pass such an ordinance, but it would have no legal bearing

What can the City do about these long trains?

Residents are encouraged to submit a blocked crossing report to the FRA at https://www.fra.dot.gov/blockedcrossings/  when they encounter long delays. The FRA is collecting data on the long trains, and good and plentiful data from Fort Collins will help the FRA.

City leadership is working with elected officials in Washington on potential legislative options.

Work continues on the project to construct an overpass at the Lemay and Vine intersection.

Is the number of trains increasing?

Yes. The number of double trains through Fort Collins in 2019 increased from about 1 per month in January to more than 1 per day in December.

When trains are stopped, is it legal to cross over, under, or between railcars?

Is there a schedule for the trains?

No. Railroad companies do not publish train schedules. The time of day a train travels through Fort Collins is unpredictable.

Is there something I can do to report being stopped by a train?

Yes. The Federal Railroad Administration has created a website where the public can report being stopped at rail crossings. The website it http://www.fra.dot.gov/blockedcrossings.

The railroad arms are down and no train is present, what should I do?

Do not lift the railroad arms, as it is dangerous and illegal. Traffic Operations does not own or maintain this equipment and cannot lift the arms to allow traffic through. Call the City of Fort Collins Police Department non-emergency number at 221-6540 so that the proper railroad company can be notified.

I'm riding the MAX. Why do we have to stop when a train approaches?

Under an agreement with Burlington Northern Santa Fe Railroad (BNSF), MAX buses on the guideway, or bus-only street, are required to stop when a train passes. The railroad is concerned about safety on the guideway, which is within the railroad right-of-way. The railroad has between 4 to 8 trains running during MAX operating hours. There is no set schedule for when the trains travel through our community, which makes it difficult to anticipate their arrival. Passengers will experience delays of a few minutes to 10 minutes when the bus is held at a station due to the train. In the Downtown area and on McClelland Street, the bus is not required to stop for trains.