The City of Fort Collins is seeking public input on approaches to how the City could regulate oil and gas development within City limits. In April 2019, Senate Bill 19-181  was adopted in Colorado, which gave local governments land use authority to regulate the siting and surface impacts of oil and gas development. The City is currently exploring regulatory options and is seeking public input in preparation for a Council Work Session discussion scheduled for January 26, 2021.

Oil and Gas Complaints and Concerns

General environmental or health concerns can be communicated to the City of Fort Collins through Access Fort Collins.

Health concerns related to oil and gas operations can be submitted to the Colorado Department of Health and Environment (CDPHE) Oil and Gas Health Information and Response Line, or by calling 303-389-1687.

Complaints or concerns about about the Prospect Energy sites in North Fort Collins can also be communicated directly to the operator, Ward Giltner (owner) at 303-489-8773.

The City of Fort Collins has an active oil field in the northeast part of the City that was first discovered in 1924. As is common with older, once remote, oil and gas developments around the state, urban growth has encroached upon the field. In the past decade, advances in oil and gas technology have led to increased production in the state, and an evolving regulatory environment.

The map below shows the active wells within Fort Collins City limits. A detailed map of wells and well status are available from the Colorado Oil and Gas Conservation Commission (COGCC). 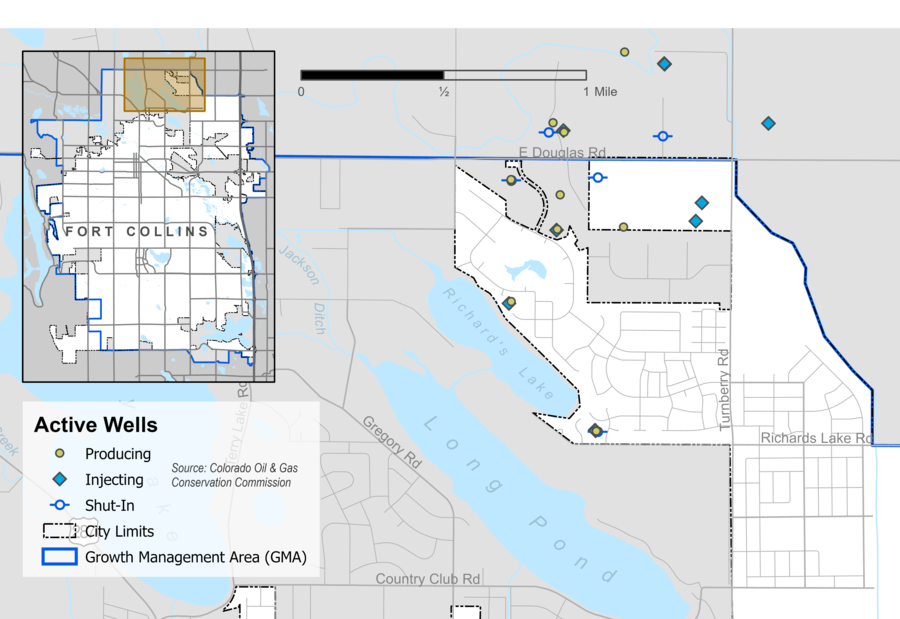 In the Fort Collins field, the vast majority of the oil is produced from an underground formation called the Muddy formation.  These wells require high pressure water injection lines which pressurize the formation, and bring a mixture of water (~97%), oil (~3%) and gas (minimal) to the surface for separation and distribution. Types of wells (and count) in Fort Collins include:

Prospect Energy is in the process of developing the Codell formation within the Fort Collins field, which is shallower than the Muddy formation and would require no new drilling.  Full development would allow for the Muddy zones to be permanently abandoned, which would eliminate the need for high pressure water injection and water treatment.  This would also introduce increased gas volumes, which could potentially be used to generate electricity on site.

Detailed information regarding spills and releases is available through the Colorado Oil and Gas Conservation Commission, and summarized here for incidents in and near Fort Collins.

List of Spills and Release in Fort Collins GMA

In 2019, the Colorado Department of Public Health and the Environment (CDPHE) released a health impacts study based on emissions data collected during field operations along the Front Range in 2016. This study concluded that air emissions related to oil and gas development may cause short term negative health impacts (e.g., headaches; dizziness; respiratory, skin, and eye irritation) during worst-case conditions at up to 2,000 feet from operations.

The City's Air Quality Advisory Board and Natural Resources Advisory Board, and County's Environmental and Science Advisory Board, hosted an air quality technical session on November 15, 2017. Discussed were an air quality monitoring assessment conducted using data collected during the 2014 Front Range Air Pollution and Photochemistry Experiment (FRAPPE), and new oil and gas health information and response resources available from the Colorado Department of Health and Environment (CDPHE).

The NCAR assessment report indicated that oil and gas emissions, along with transportation sources, were the largest contributors to the regions high ozone events.

Watch the session on FCTV

In 2017, Fort Collins, Colorado State University (CSU) and Prospect Energy collaborated on a sampling effort just outside City limits to characterize emissions during the hydraulic fracturing and flowback stages of a well recompletion. Measurements indicated that emissions were lower than other measurements along the Front Range.

In 2016, Colorado State University (CSU), in collaboration with the Colorado Department of Public Health and Environment (CDPHE) and several operators, completed a monitoring study that characterized emission rates from oil and gas operations along the northern Front Range. The lowest emission rates were measured during hydraulic fracturing operations, followed by production. The highest emissions rates were measured during flowback, which is a pre-production stage where the fracking fluid, produced water, oil, and natural gas flow up and out of the well before it is placed into production

In 2013, air sampling was performed in Fort Collins per the terms of the City's Operator Agreement with Prospect Energy. Measurements indicated concentrations of oil and gas related air pollutants were lower in Fort Collins than near larger oil and gas fields in eastern Colorado.

In 2013, an Operator Agreement between the City and Prospect Energy which was implemented in 2013 and structured to renew in 5-year increments (last renewed in 2018). This agreement goes above and beyond State and Federal requirements for air sampling and other Best Management Practices (BMPs) for new wells drilled within City limits.

The City's Land Use Code, which includes setback requirements for new development around existing wells and other oil and gas infrastructure (called reciprocal setbacks). Conversely, the COGCC regulations include setbacks for proximity of new wells to existing development. These rules were updated in 2018 as follows:

Senate Bill 19-181 (SB181) requires the realignment of State rules for the oil and gas industry in accordance with new mandates that prioritize the protection of public safety, health, welfare, and the environment. Below is a summary of rulemaking activity since the adoption of SB181 in April 2019.

On April 6, 2020 the Larimer County Board of Commissioners approved new oil and gas facility regulations. For Fort Collins, these rules would apply to the City's Growth Management Area (GMA), and any City owned property outside of City limits.