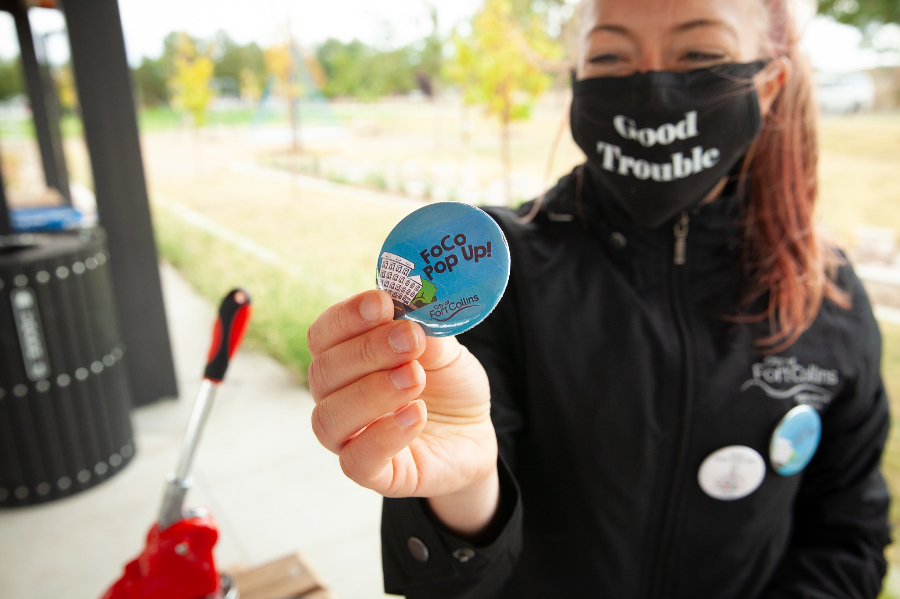 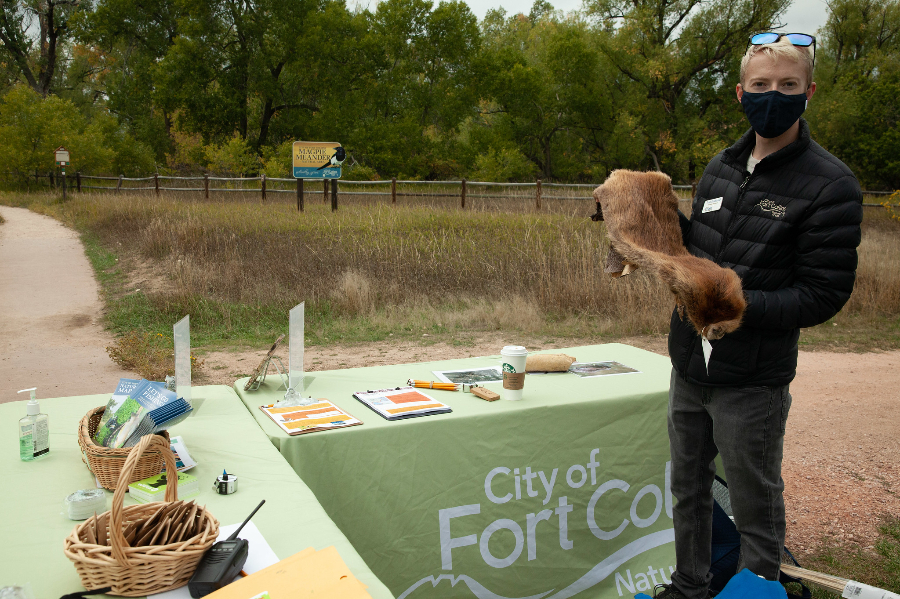 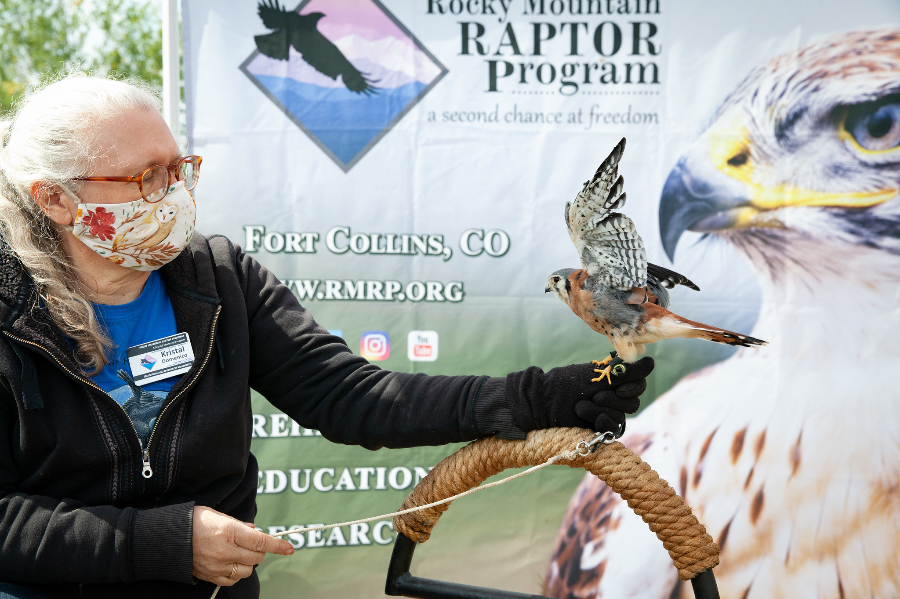 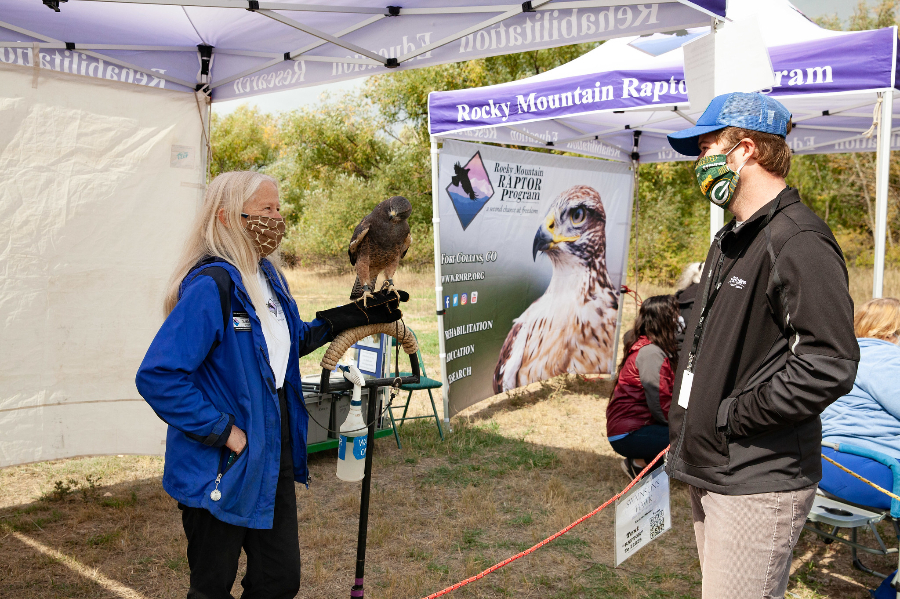 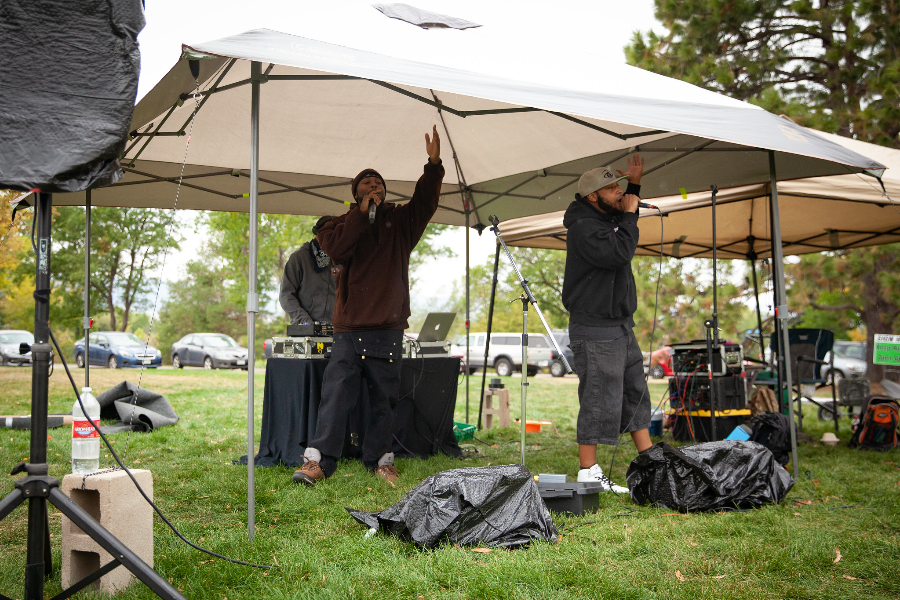 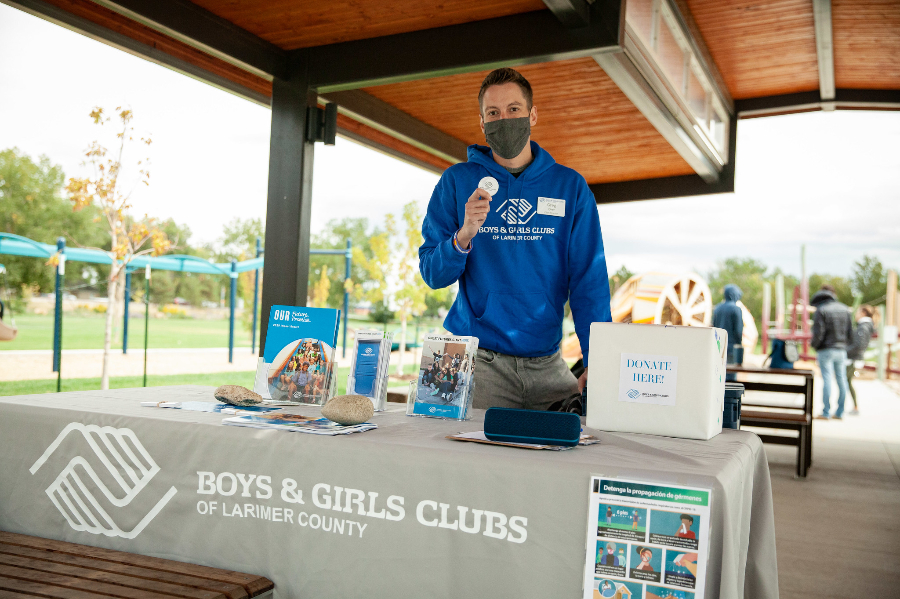 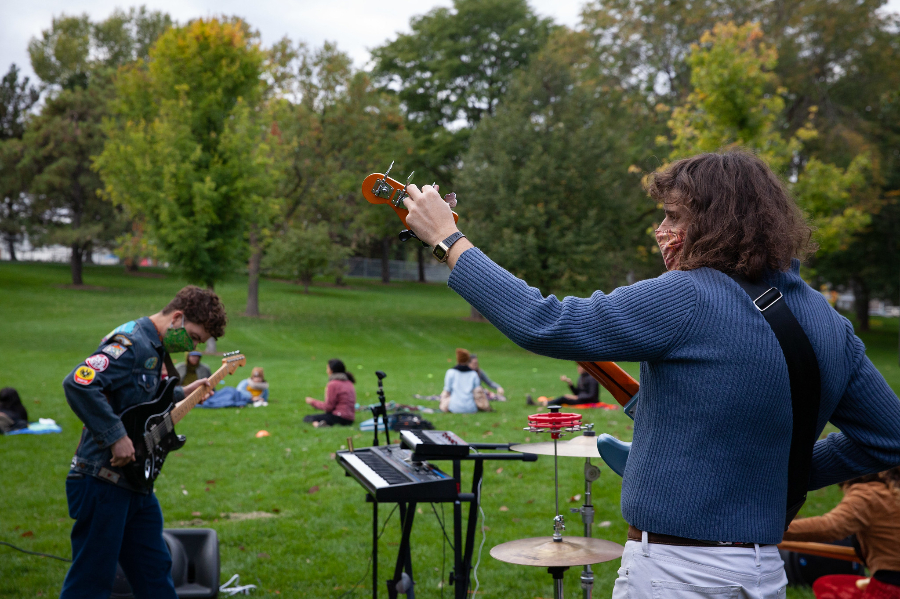 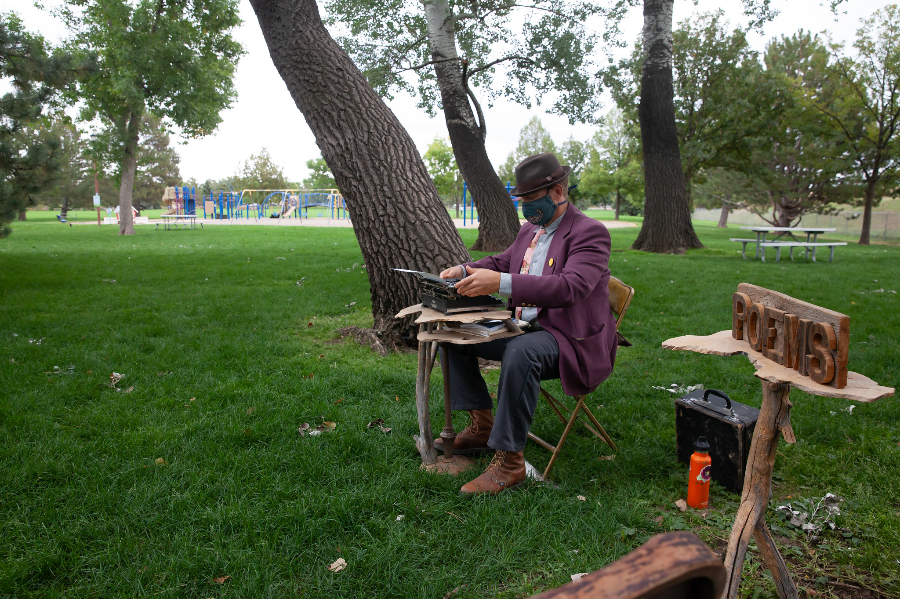 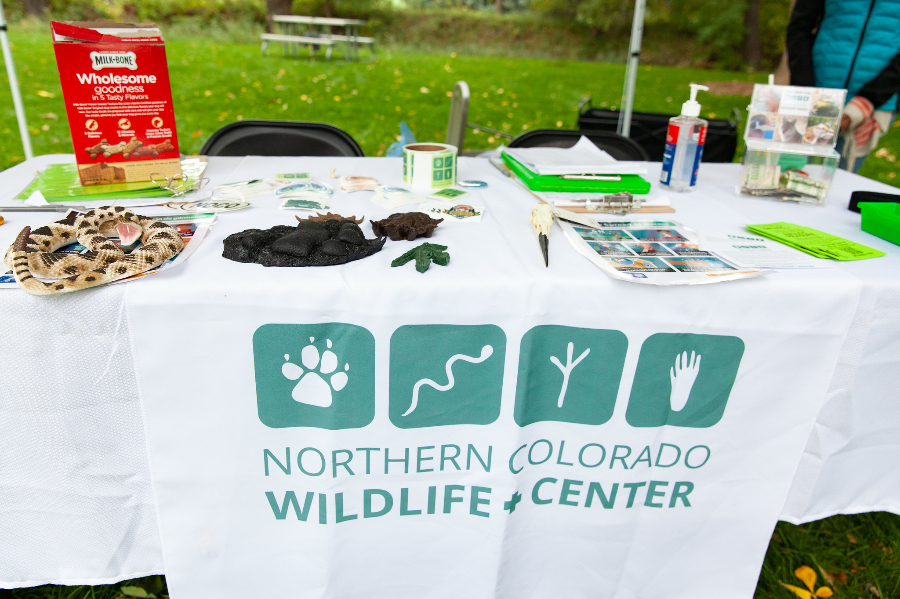 Below are some of the activities that were included as part of FoCo Pop Up on Sept. 27, 2020. Some self-guided activities can still be done anytime! 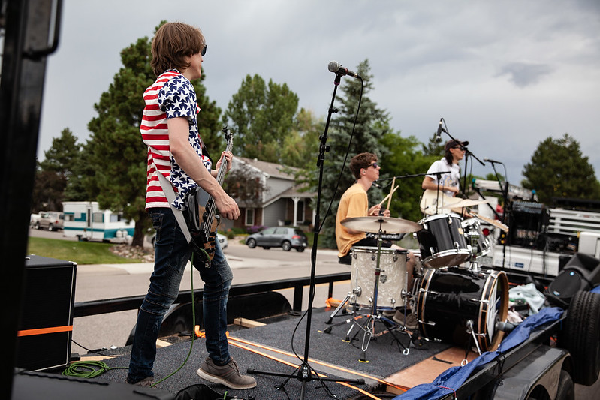 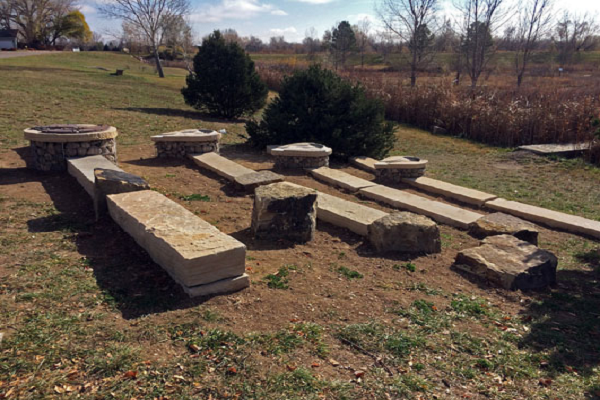 Gravity Course is an interactive public artwork envisioned by local artist Joe McGrane and in collaboration with the City of Fort Collins Utilities Department, Webber Middle School faculty, and City of Fort Collins Art in Public Places. The artwork reinforces and compliments a new interpretive trail and sign system developed by Webber Middle School students that speaks to the storm drainage and water quality functions of the open space. “Gravity Course,” located on Wakerobin Lane east of Regency Drive, will serve as an overlook, amphitheater and gateway to the new interpretive walkway.

As part of Gravity Course, the “Collecting Stone” is a map that illustrates the storm drain system that collects storm water from the neighborhood and feeds the pond area. The map can be activated by pouring water over the stone where it can flow through drains and channels and into the basin. Another primary feature of Gravity Course is a series of three “Basin Stones” that are placed alongside the steps leading to the bridge. These interactive, carved stones illustrate three functional values of the stormwater area: water quality, infiltration, and detention. 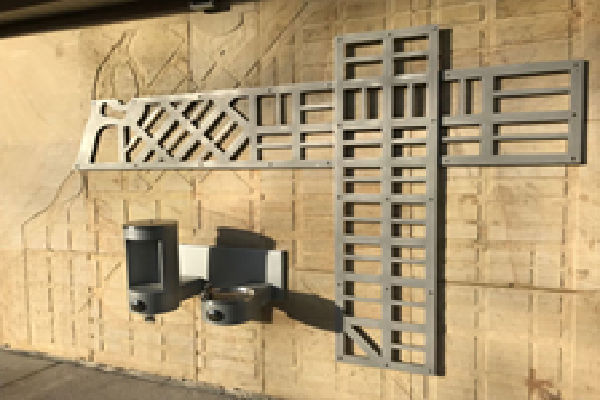 Artist Lisa Cameron Russell an artwork on the inspired by the imagery of Franklin Avery’s 1872 “New Town” plat. In 1872 the Larimer County Land Improvement Company purchased and incorporated 3,000 acres of land outside the original town plat. Unlike the “Old Town” plat that was built off the Poudre River, Franklin Avery’s 1872 “New Town” survey established a grid based on the compass points, creating a contrasting intersection of old and new streets still present today. The survey created a grid pattern with smaller lot sizes that transition into larger lot sizes further from the Downtown core. Avery’s plat also included wide streets of 100 to 150 feet to take advantage of the “wide open spaces” the new frontier provided. View this Art in Public Places project in Avery Park near the Campus West area of Fort Collins. 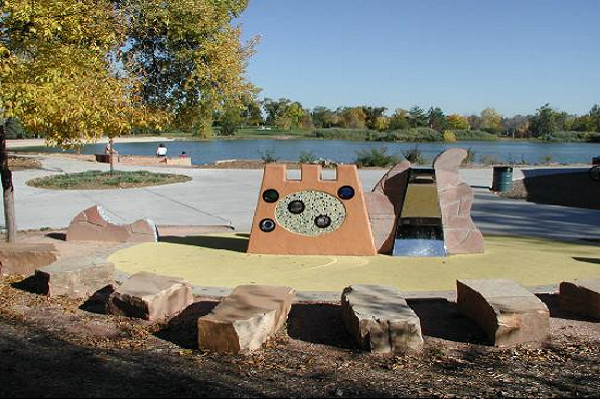 100 Days of Summer by artist Joe McGrane is a fun, interactive and social environment that serves as a sculptural entry plaza for City Park Pool. It uses playful wave imagery, washing over the events of summer, as a base for a variety of kid scale curiosities and optical phenomenon peculiar to a summer at the pool. The center castle form holds a large steel carnival mirror. Viewing tubes span the width of the concrete form and contain objects and images of the pool's past. Colorful tiles adorn the seating and there is a ring of 100 aluminum disks symbolizing the length of the pool season. Visit this Art in Public Places project at the entry plaza of the City Park Pool. 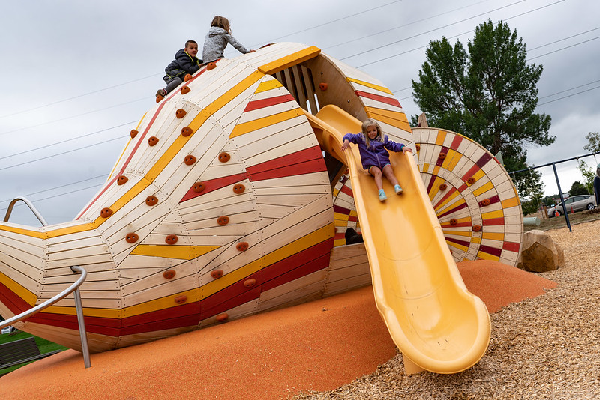 Park Planning & Development staff worked with artist Mario Miguel Echevarria and Earthscape, an award-winning playground company, to develop the iconic play structure for Sugar Beet Park. The sugar beet is a natural fit for the theme and location of the new park at the intersection of Vine Drive and 9th Street, near the historic site of the Great Western Sugar Factory where sugar beets were processed. Special thanks to the Northside Neighborhood Advisory Committee for their involvement in developing the concept for this play structure. 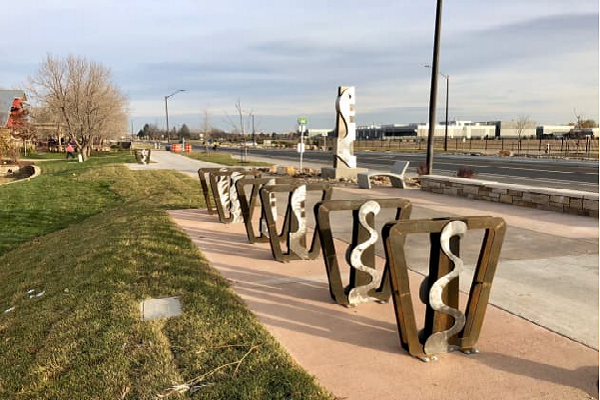 Fort Collins artist Mark Leichliter worked with the Lincoln Corridor Project team to develop art for this site. The artworks are integrated into the design of the corridor and are located throughout the project. The artwork is intended to accentuate the corridor and provide wayfinding elements. The artworks, entitled Terralogue Totems, consist of sculptural metal monoliths, bike racks, and stone and metal bollards. Each location along the corridor includes a large sculptural monolith, accompanied by combinations of bike racks and bollards.

Terralogue Totems consists of three motifs, each relating to specific location along the Lincoln Corridor: "Course" represents the River; the physical, actual course of the Poudre — and the flowing passage of time. "Construct" (as a noun not a verb) speaks to the influence of humans on the landscape and represents the built environment. This Totem's placement in the center of the corridor serves as a balance and the nexus of the natural and the man-made. “Crop" placed at the Eastern most end of the project, harkens to both the natural, endemic plant life and the history of agriculture in the area. Visit this Art in Public Places project along Lincoln Avenue between Cherry Street and Lemay Avenue. 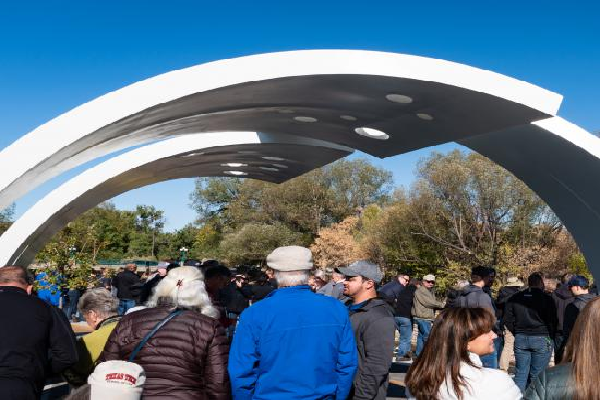 Whitewater by John Davis is inspired by water rapids and the associated whitewater that is created by the bubbles generated as water crashes against the rocks and boulders. It creates a connection between the overlook plaza and rapids below. The curving “wave” shapes of the structure mimic the waves of water in the rapids of the Cache la Poudre River below.

The sculpture, titled Heritage Gateway, is installed at the Poudre River Whitewater Park along the Poudre Trail across from Whitewater, the wave shelter located on the south bank of the river. Both works were created by Art in Public Places (APP) artist John Davis.

Thanks to support provided by the Poudre Heritage Alliance, Downtown Development Authority and other community donors, visitors to the park can now learn about the history and importance of the Cache la Poudre River, and its long-lasting impacts on agriculture, industry and recreation in Fort Collins. Visit this Art in Public Places project at the Poudre River Whitewater Park east of College Avenue along the Poudre Trail. 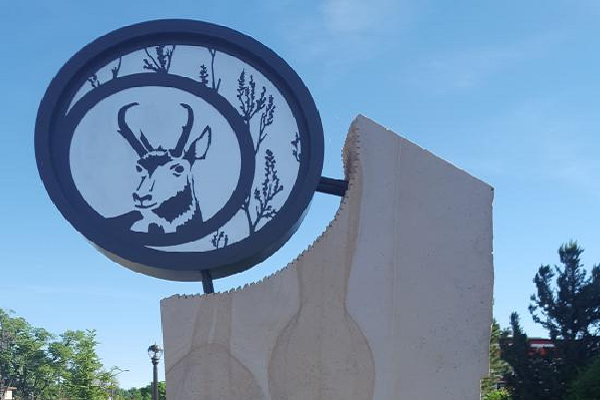 Artist Andy Dufford designed 10 stone and metal monuments that have been placed along North College Ave. The stone columns are topped by unique aluminum medallions, each depicting imagery drawn from the nearby Cache la Poudre River and plains. The sculptures include lighting for the adjacent sidewalks and address indicators for the block to serve in wayfinding. Visit these Art in Public Places projects along North College Avenue between Conifer Street and West Willox Lane.