The third and latest version of the draft regulations is below.

The purpose of 1041 powers is to give local governments a seat at the table during the review of particular development projects occurring within their jurisdiction, even when the project has statewide impacts. The term “1041” refers to the number of the bill, House Bill 74-1041, that created the 1041 powers in 1974 and the statutes regarding 1041 powers are also referred to as the Areas and Activities of State Interest Act (“AASIA”).

The City of Fort Collins is developing regulations for water and highway projects that are contextually appropriate to Fort Collins, provide predictability for developers and decision makers, and adequate guidance for review by City staff. The intent is to match or exceed state requirements to ensure the protection of public health, safety, welfare, the environment and wildlife resources.

The City is authorized to create these rules under the authority given by the State of Colorado through a 1974 law commonly known as "1041" (for House Bill 1041). The bill essentially allows local government to regulate activities of state interest through a local permitting process.

Where We've Been So Far#

Discussion and the potential creation of 1041 Regulations in Fort Collins was a priority of City Council for its 2021-23 term. City staff began working on regulations in 2021, and regularly reported to Council for the remainder of the year.

In September 2021, Council moved forward with an option created by City staff that would create 1041 Regulations for two types of construction activities in Fort Collins (see below). In the meantime, there would be a moratorium on those activities while regulations are developed.

In October 2021, City Council adopted at second reading a designation ordinance and moratorium for the following two activities:

City Council is expected to extend the moratorium until early 2023, at which point the final 1041 Regulations are expected to be adopted.

What are communities regulating through 1041 Powers?

Since the May 4, 2021 City Council discussion on 1041 Regulations, staff has personally reached out to thirty-five local communities, different City Departments, regional water providers and local sanitation districts to better understand lessons learned and concerns regarding 1041 regulations.

Staff initially focused on peer communities with populations greater than 50K residents, however given the limited number of municipalities that have adopted 1041 Regulations staff broadened its research to include both smaller municipalities and counties. Below is a snapshot of information collected and key lessons learned. Of particular note is the majority of municipalities that reported as having adopted 1041 Regulations in the 2015 Colorado Land Use Survey (presented on the Department of Local Affairs website) have not adopted them 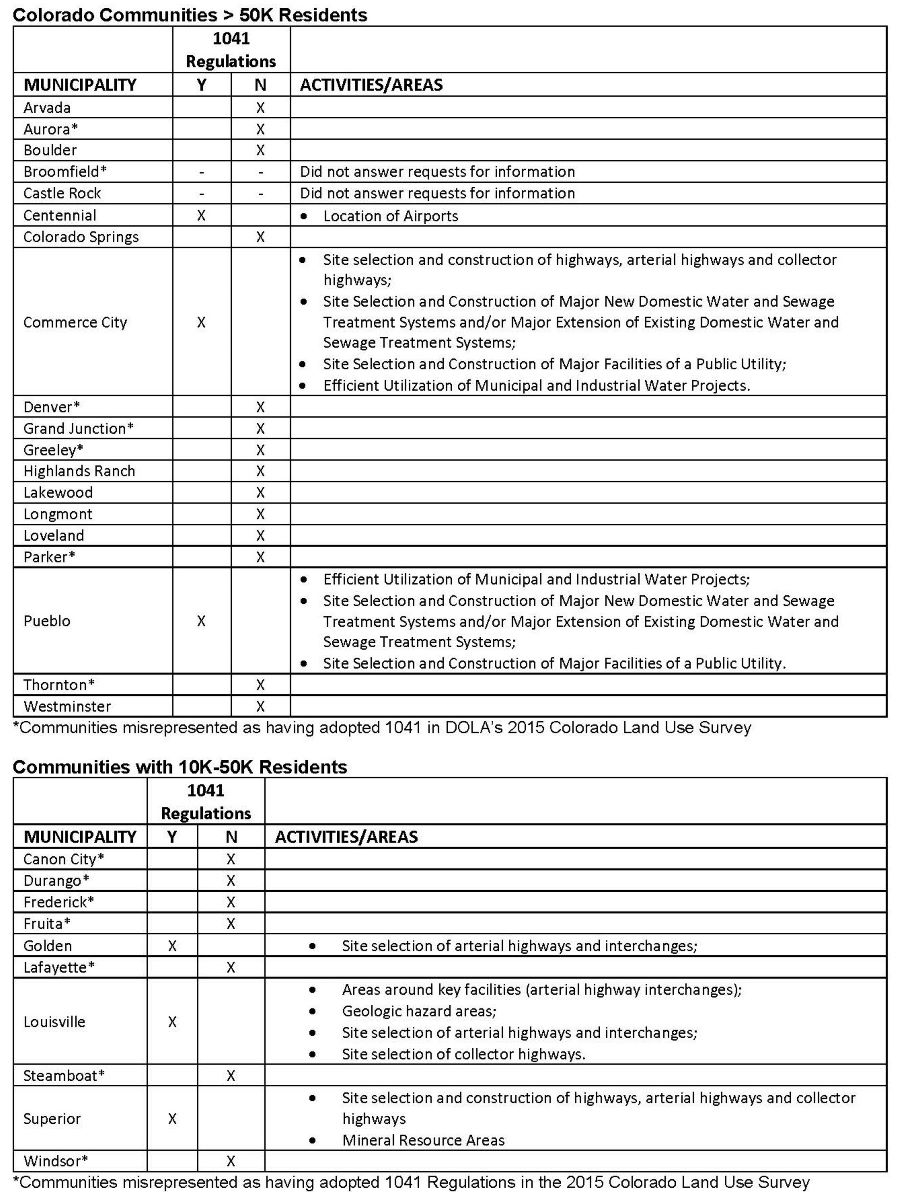