Each winter, the Streets Department battles snow and ice on the streets of Fort Collins through plowing and deicing operations. Studies indicate applying deicing material reduces injury accidents by 88% and pays for itself in a half hour in terms of avoided vehicle crashes. 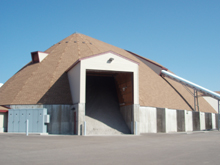 The City does not use 100% Magnesium Chloride or sand because of the detrimental effects to air quality and the environment. We continuously test new products, as they become available, for the safety of our community while placing an extremely high value on environmental protection and cost considerations. The City has also invested in environmental testing of deicing materials through Colorado State University and CDOT's deicing material environmental impact studies.

Anti-icing is the term used to describe the process of spraying material onto the road BEFORE a storm. Coating the pavement with an anti-icing material, such as salt brine, can prevent the bonding of snow to the pavement once it begins falling. This encourages the snow to begin melting before a plow truck is even on the road and gives us a jump start to clear roads. In addition, roads will return to bare pavement even sooner after snow stops falling. It's a win-win for everyone!

The City of Fort Collins Deicing Facility is one of its kind in the country. The state-of-the art facility was constructed and became operational in 2006, just months before the 2006/2007 back to back holiday blizzards.

In 2008, the City of Fort Collins received the Excellence in Storage Award from the Salt Institute. The award recognizes high standards of environmental consciousness, best management practices, and effective management of winter material storage. The City of Fort Collins was one of 10 city and state transportation agencies across North America that received the award. 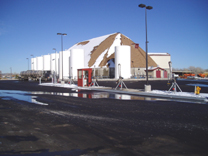