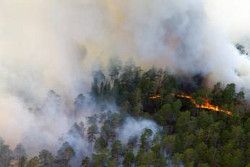 Smoke from wildfires is a significant source of air pollution and can impact air quality in our community even when a fire is miles away.

Anytime you see or smell smoke during a wildland fire, know that local air quality has been compromised.

Should you consider limiting your time and activities outdoors due to poor air quality?  View the Air Quality and Outdoor Event document for guidance.

Smoke is made up of a complex mixture of gases and particles including fine particulate matter (PM 2.5).  These microscopic particles can get into your eyes and respiratory system which can irritate the lungs and lead to a range of symptoms. Symptoms of smoke exposure include:

While smoke can impact anyone, sensitive populations such as children, pregnant people, the elderly, and those with asthma and other respiratory concerns are especially at risk during a smoke event.

How to Prepare for Smoke Impacts from Wildfires#

What You Can Do to Minimize Impacts from Smoke#

Should I use a mask or respirator during a smoke event?

A mask or respirator may help to reduce exposure during a smoke event. It is important to learn how to protect your lungs from wildfire smoke or ash.

When should I limit my outdoor activities?

While it is an individuals’ choice on when to limit activities, once air quality values approach moderately high, you may be affected and should consider limiting your activities. Learn more about the Air Quality Index levels of health concern and read through the Outdoor Event Guidance Document for the City of Fort Collins.

If there is a fire close by should I consider evacuating?

Sign up for NOCO Alerts to be aware of evacuation alerts in your area.