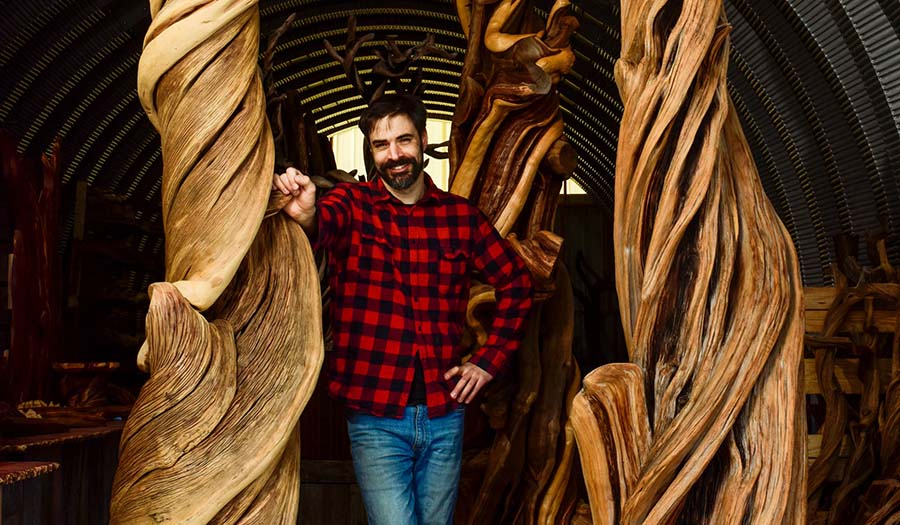 The Gardens on Spring Creek and Art in Public Places are excited to bring you a temporary art installation by Montana artist Tom Benedict now through February 12, 2022

Rocky Mountain Junipers are some of the oldest trees in the world. The oldest one known, the Jardine Juniper in Utah, is over 1,500 years old and counting. The trees I collect for sculptures are long dead. They lived their lives in harsh conditions like rocky hillsides or windy, exposed ridges. By the time I get to them, they are grey, weathered, and dry, but usually still standing. A potential issue with most wood kept outdoors is rot, and old growth Juniper wood is incredibly rot resistant. Being closely related to cedar, it contains natural rot and insect resistant resins within the wood. That’s why juniper branches were harvested for fence posts a hundred years ago. Some of those fences are still standing. Dead juniper trees can actually last for thousands of years. The rings on a dead juniper can be cross referenced with nearby live trees to get a year attached to each growth ring. The varying thickness over time of the growth rings in juniper are being studied for climate change data. Scientists called dendrochronologists have used this technique to age juniper deadwood back almost 3,000 years. Read an article in the Bozeman Daily Chronical.

Working with this wood is a truly humbling experience. To create my sculptures, I remove as much of the original exterior wood as possible, leaving only the tree's inner core. The twists, grooves, and contours of the sculpture all follow its natural growth and shape. Any cut ends and branches have been shaped through carving to exaggerate many of the tree's natural features. The contrasting black coloration is added using a torch to increase the contrast and details of the sculpture. Over time, the sculpture will weather to a light grey coloration while the torched areas will remain black.

Finding these trees is a treasure hunt in an amazing setting among trees that have remained the same despite seeing so much change in the world. Rocky Mountain Juniper trees are abundant in Colorado, so I encourage anyone interested and able to get out and take notice of the trees around you. If you are lucky, you might find yourself standing among ancient wild junipers, which is truly a sight to behold.

We've brought the treasure hunt to The Gardens! There are 10 painted Rocky Mountain juniper sculptures placed throughout our 12 acres of botanic beauty.  Can you find them all?  Use the link below to download the handout or pick one up from the front desk! 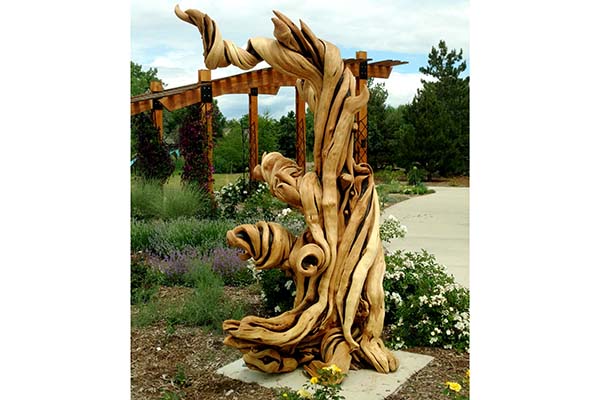 The Behemoth Juniper is the largest and most intensely twisted juniper tree in this collection. It grew alongside cactus on a steep and arid hillside. Its roots grew sharply upward, suspending the rest of the tree over the cactus covered slope below.

I found this piece dead and still standing. Upon releasing the remaining roots, the weight of the rolling tree caused it to break off some of the more delicate and weathered branches. In the carving process, at least 150 lbs. of material were removed from this sculpture. Torch work in the deeper grooves of the sculpture emphasizes its extreme twists. 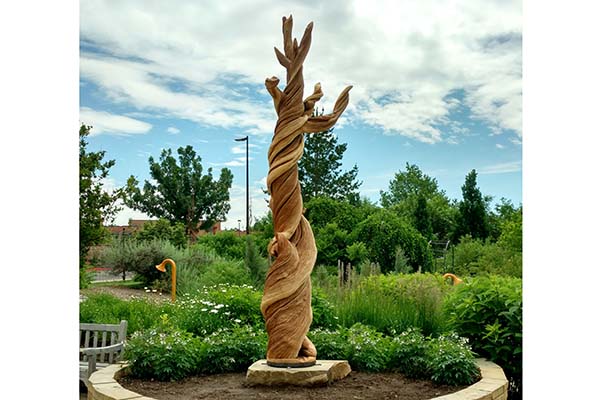 The Corkscrew Juniper, in life, was not oriented upright as you see it. It grew on a steep hillside among boulders, sprawling outward horizontally as it grew. At one point decades ago, some of its branches were cut for fence posts. When discovered, the roots had deteriorated and broken, leaving the dead tree laid out on the rocks below.

This is one of the most elegant and evenly twisted junipers that I have ever worked with. Its evenly twisted yet straight trunk resembles a corkscrew, which was the inspiration for its name. Not much material was removed from this piece, and it is the closest to its natural form of my sculptures presented at The Gardens. 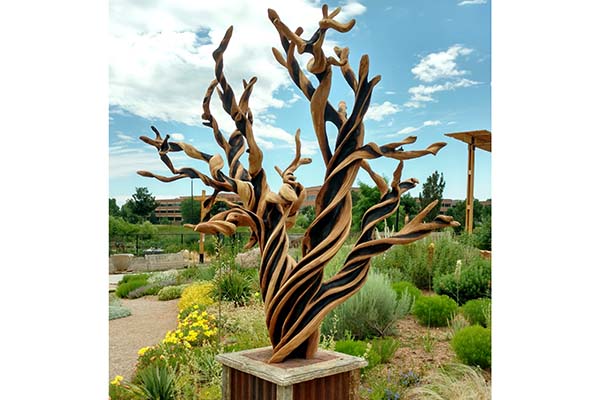 The Grappling Juniper grew from a large crack on a rocky cliff. Its root system was deeply embedded through decomposing granite. This tree was discovered relatively soon after it had died. Much of it still had bark remnants sloughing off after insects had fed on the sapwood underneath.

This tree has the appearance of two trees twisted together, grappling for the better position. In the carving process, at least 100 lbs. of material were carved away from this sculpture to reveal the inner wood. Extensive torch work creates a high contrast against the light color of the raw wood. 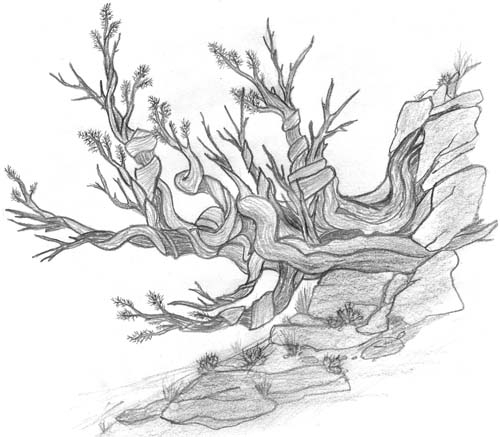 This collection will be on display in the Children's Garden, Undaunted Garden and Theme Gardens through February 2022.

Don't miss original work by Tom Benedict in The Gardens Gift Shop and learn more about the horticultural significance of the Rocky Mountain Juniper by reading the blog post below.