Address Change – An address change may be issued due to an error made at the time of initial addressing, a change of use to a property, or any reasonable request by the owner of the property.  This process is detailed in Section V.

Address Grid – The address grid is based upon Public Land Survey System (PLSS) sections and divides the City into blocks for the purpose of assigning addresses.  There are ten blocks per mile and 100 blocks per square mile section. 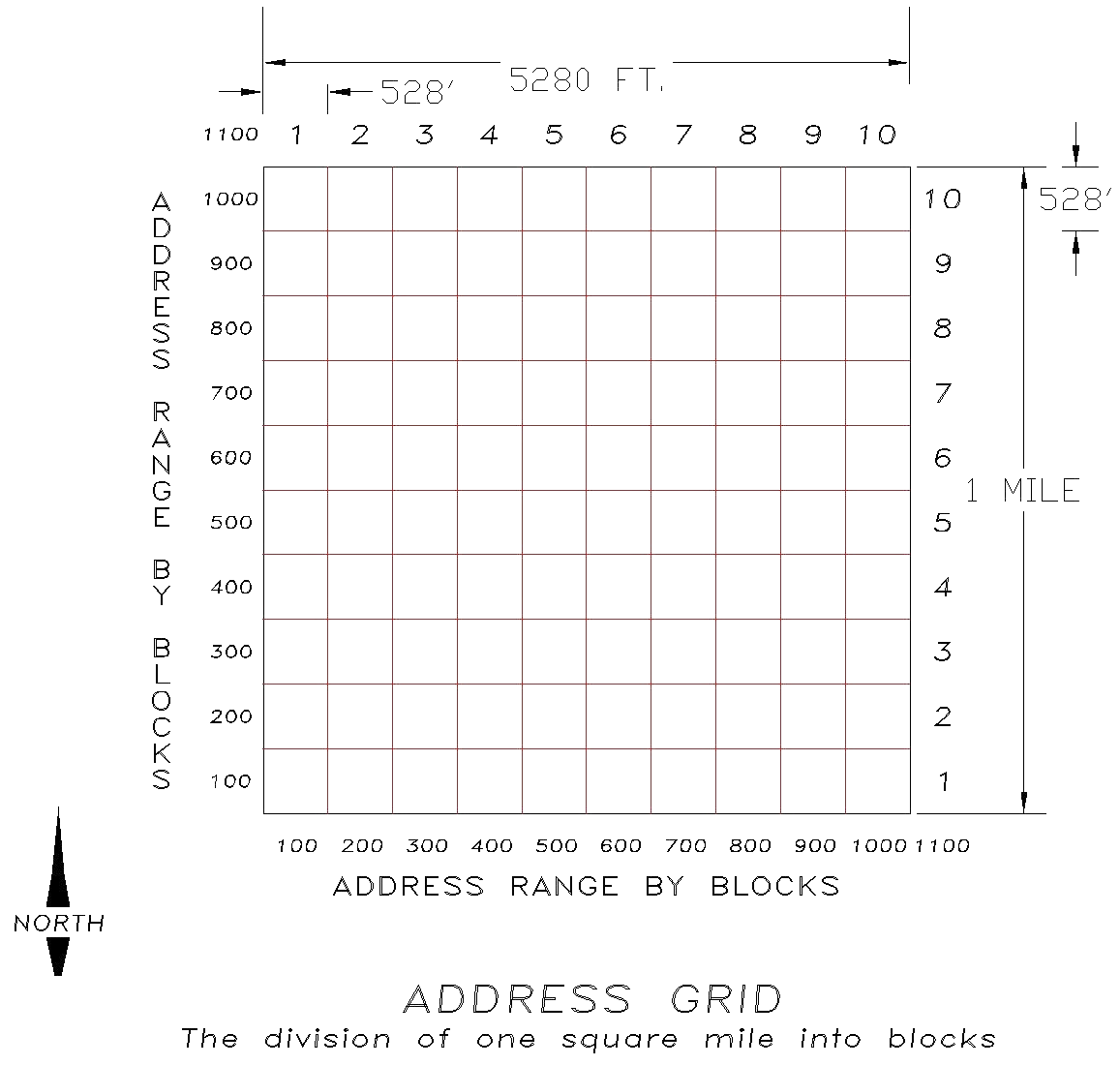 Address Increment – Addresses for single-family lots along a block are generally separated by six (i.e. x02, x08, x14, x20, etc.), which leaves two numbers between each lot for infill addresses on each side of an odd or even-numbered block.  Larger lots may include more separation between address numbers.  A set of numbers (x00, x01, x98, and x99 at a minimum) are generally reserved at the start and end of each block for non-mailing utility addresses.

Address Range – A term used to identify a series of blocks or addresses on one street.  The standard for odd and even numbers places even numbers on the north side of east/west streets and the east side of north/south streets.

Alpha Addresses – Alpha characters are not permitted in addresses, unless used for secondary addresses identifying duplex, triplex, and fourplex units (i.e. A, B, C, D) or accessory dwelling units on a property.  These letters increase in the same direction as street addresses.

Alpha characters are not used for building designations.  Developments with multiple buildings may include individual street addresses when fronting public ROW or a single primary address combined with building numbers if the site is contained and there is limited access to the site from public ROW.

Campus Address – In locations where there is a campus or group of buildings with one major access point, a single address is assigned to the point of access and building numbers are applied to each building.

Corner lots – Corner lots at the intersection of two or more streets may receive an address assigned to each street to remain active throughout construction.  A corner lot’s final address shall be determined upon completion of a building’s certificate of occupancy.  The address identifying the building’s primary access shall remain active and the additional addresses originally assigned to the lot shall become inactive.

Staggered Addresses – Staggered addressing is the method of forcing the address from one side of the street to match or nearly match with each other. It often happens in a new subdivision with curvilinear streets that have more lots on one side of the street than the other. When this occurs, addresses on the short side of the block are eliminated, or staggered, in an attempt to keep facing addresses from across the street more closely aligned with each other. It is desirable for the police and emergency services to know that the address across the street is at or near the same physical address, and it is desirable to have a strong association with beginning and ending address sequences at intersections or address break points.

Street Naming Standards – Per an intergovernmental agreement between the City and County, standards have been established for the naming of streets, acceptable prefixes, and suffixes. These standards are found on Larimer County's website.  The process for reserving street names in the City of Fort Collins are detailed in Section II.

Suite – A secondary address that identifies tenant space for commercial offices or retail.

Unit – A secondary address that identifies separate residential space within a building or accessory dwelling units on one property.  Fractional numbers are not permitted.

Unit Level Addressing – Where buildings are divided to contain more than one occupant (often termed the tenant finish), the City of Fort Collins does not assign additional street addresses.  Instead, secondary addresses for commercial suites and residential units are assigned as accessories to the primary address.  This process is detailed in Section IV.

Street name approval is required for all public right-of-way and private drives, in order to maintain standards for emergency response within the Larimer Emergency Telephone Authority service area.  All proposed street names are verified against the Larimer County Street Inventory System ( Street Inventory).  Duplicate street names and/or phonetic similarities are not allowed.

Additional Standards for the City of Fort Collins

The following table of suffixes are the only ones that can be used for new street names.

Upon record of a new subdivision plat, all buildable lots are assigned an address to the street fronting a building’s primary access.  Address assignment occurs in coordination with emergency services, in order to support best response methods.  The location and access of each building along an address block shall establish the appropriate address number.  Numbers outside of the address block range are not permitted.  Existing addresses assigned to vacant lots or former buildings are not always preserved for new construction.

Address numbers for single-family lots are generally separated by six, which leaves two available numbers in the appropriate odd or even range between each lot for infill addresses.  Larger lots may include more separation between address numbers.  A set of numbers are generally reserved at the start and end of each block for non-mailing utility addresses.

Multi-use or Mix-use Buildings – Buildings with suites and/or apartment units residing within the same building shall have one address for the building with unit-level addressing assigned to the individual units. This is to avoid confusion when emergency services respond to a building's fire alarm signal.

Corner Lots – Corner lots may receive two or more addresses if the building orientation is not defined when the subdivision plat is recorded.  One address is assigned to each street to remain active throughout construction.  A corner lot’s final address shall be determined upon completion of a building’s certificate of occupancy.  The address identifying the building’s primary access shall remain active and the additional addresses originally assigned to the lot shall become inactive.

Non-mailing Addresses – Non-mailing addresses may be assigned to properly identify locations for utility services, monument signs, or other uses requiring permits.  Depending upon the location, these addresses use available numbers at the start or end of each block or infill addresses between existing buildings.

Where buildings are divided to contain more than one occupant (often termed the tenant finish), the City of Fort Collins does not assign additional street addresses.  Instead, secondary addresses for commercial suites and residential units are assigned as accessories to the primary address.  This process provides for a consistent method of assigning unit/suite numbers by floor or level within the structure.

Procedure – Whenever an additional tenant space is created, the City of Fort Collins requires a Unit Level Addressing form to be completed and filed with the City.  This document can be found at:

After completing the contact information on the form and including a floorplan or sketch of the layout, it is emailed to the GIS Department gis@fcgov.com.  The City of Fort Collins GIS Department will assign the appropriate units/suites and forward the information to USPS, Poudre Fire Authority, Fort Collins Utilities, and Building Services.

Floor plans or a sketch of the tenant spaces of the entire structure are required, so that new units/suites are consistent with the range and format of any addresses already in place.

Timeline for Address Assignment – Floor plans must be submitted with all new construction during the Development Review process, so that all addresses (primary and secondary) may be assigned once the project is recorded.  For any tenant finishes occurring in existing structures, secondary address assignment should be requested prior to or during construction, but before any utilities are set, in order to ensure utility meter banks match the official addressing for the structure.

Distribution – Approved ULA forms are distributed to the following:

An address change may occur when access to a property and/or building has changed, in order to more accurately correspond to the primary entrance.

Address change requests must be in writing and delivered to the City of Fort Collins GIS Department (gis@fcgov.com).  Requests may be made only under the direction of the property owner.  This ensures that the property owner is fully aware that a change has been requested for one or more tenant spaces and how a change may impact records for the location.  The City of Fort Collins GIS Department will notify the owner confirming receipt of the request and that the requested change is being researched.